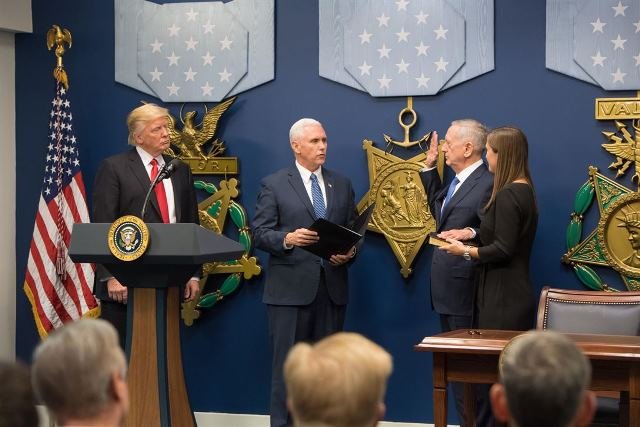 Mattis once again swore “to support and defend the Constitution of the United States” just as he did as a young Marine reservist in 1969. Mattis retired as a four-star general in 2013.

The defense secretary welcomed the president to the headquarters of the military “where America’s awesome determination to defend itself is always on display. I would just tell you that you have made clear, Mr. President, your commitment to a strong national defense and the Americans honored in this hall remind us of our strength as a nation of patriots.”

The president reemphasized his “total confidence” in Mattis, calling him “a man of honor, a man of devotion and a man of total action.”

The secretary has been in place since he was confirmed by the Senate on Jan. 20. He reported to the Pentagon for work the next day.

The president pledged to support service members and their families.

While at the Pentagon, Trump signed two executive actions to ensure “the sacrifices of our military are supported by the actions of our government.”

The first action initiates “a great rebuilding” of the armed services. It calls for developing a plan for new planes, new ships, new tools and new resources for the services. “As we prepare our budget request for Congress — and I think Congress is going to be very happy to see it — our military strength will be questioned by no one, but neither will our dedication to peace,” he said.

The second action establishes new vetting measures “to keep radical Islamic terrorists out of the United States of America — we don’t want them here,” the president said. “We want to ensure that we are not admitting into our country the very threats that our soldiers are fighting overseas. We only want to admit into our country those who will support our country and love, deeply, our people.”

Trump promised to service members that his administration will “always have your back, we will always be with you.”

Before the ceremony, Trump and Pence met with defense leaders in the “Tank” — the meeting room of the Joint Chiefs of Staff.

Earlier in the day, Mattis directed reviews of the F-35 Joint Strike Fighter program and the Presidential Aircraft Recapitalization program. Pentagon spokesman Navy Capt. Jeff Davis said the purpose of the reviews is “to inform programmatic and budgetary decisions, recognizing the critical importance of each of these acquisition programs.”

He called it a prudent step in anticipation of the budget process, which will help inform the secretary’s recommendations to the president regarding critical military capabilities.

“This action is also consistent with the president’s guidance to provide the strongest and most efficient military possible for our nation’s defense,” Davis said, “and it aligns with the secretary’s priority to increase military readiness while gaining full value from every taxpayer dollar spent on defense.”

20 January 2022 By Ashraf Siddiqui More than 7,000 books of different ...
END_OF_DOCUMENT_TOKEN_TO_BE_REPLACED