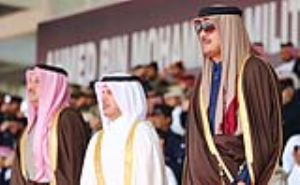 Prime Minister and Minister of Interior Sheikh Abdullah bin Nasser bin Khalifa Al-Thani along with number of ministers, Defense and Security Officers and delegates from friendly countries were also present on the occasion.

Emir of State of Qatar inspected the graduates’ parade.

Al Kaabi in his speech said that the 12th class included 90 officer cadets for the Armed Forces, Ministry of Interior, Lekhwiya, Emiri Guard, and state security. He noted that the graduates received training in Qatar, Mongolia, Britain and France that helped elevate their spirits and strengthen their sense of belonging to the country and to the Emir of Qatar.

Commander of the Ahmed Bin Mohammed Military College said that the experience will help the new graduates play their part in Qatar’s renaissance.

In recognition of his services and efforts in the development of the Military College, Emir of Qatar facilititated Brig. Hamad Ahmed Al Nuaimi, former Commander of Ahmed bin Mohammed Military College.

Emir of Qatar watched a performance of the Pakistani military band. The band was comprised of 52 military personnel.

Later, the graduates took the oath.