SAARC Sec General Calls On Sartaj Aziz, Pakistan To Take Over The Position 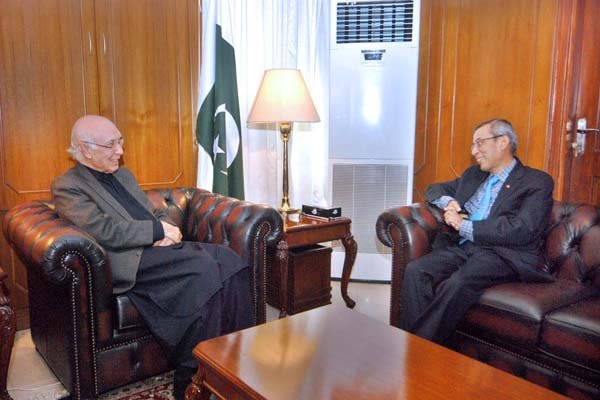 Outgoing Secretary General of South Asian Association for Regional Cooperation (SAARC) Arjun Bahadur Thapa, who is on a visit to Pakistan, paid a farewell call on Adviser to the Prime Minister on Foreign Affairs Sartaj Aziz here Friday.

The Adviser reaffirmed Pakistan’s commitment to regional cooperation under the umbrella of SAARC for promoting welfare of the people of South Asia, improving their quality of life, economic progress, social uplift and cultural cooperation.

He said that due to several impediments and challenges, SAARC had been unable to fulfill the vision that was laid out for it by its founding members. He believed that the SAARC Secretariat could play an important role as a catalyst to bring all the member states together and ensure timely and effective implementation of program and activities that would benefit the region.

Sartaj Aziz said that Pakistan was looking forward to welcoming SAARC leaders for the 19th Summit that was scheduled in Islamabad in November but was postponed when India impeded the SAARC process and violated the spirit of the SAARC Charter.

Pakistan, he added, remained committed to hosting the 19th SAARC Summit at Islamabad at the earliest so that the objectives of regional cooperation under the SAARC umbrella could be pursued more vigorously.
The SAARC Secretary General emphasized the need to overcome the difficulties that the organization faced and expressed the hope that the 19th SAARC Summit would be held in Islamabad as soon as possible.

He also emphasized that internal and bilateral problems of member states must not be allowed to affect the organization and that 19th SAARC Summit should be held as soon as possible to put the whole SAARC process back on track.

On behalf of the Ministry of Foreign Affairs, Syed Zulfiqar Gardezi, Additional Secretary (Asia Pacific) hosted a lunch for the Secretary General, which was attended by Amjad Hussian B. Sial, Secretary General-elect of the SAARC.

Thapa, who hails from Nepal, is the 12th Secretary General of SAARC.

He completes his tenure on February 28 after which Amjad Hussain B. Sial, former Special Secretary, Ministry of Foreign Affairs of Pakistan, is to take charge as the next Secretary General of SAARC.