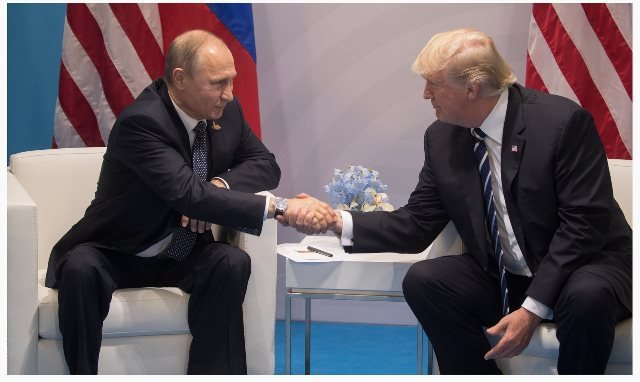 A first date is always awkward. And indeed Donald Trump and Vladimir Putin’s first official meeting was exactly that awkward.

It’s likely that other participants in the G20 summit also had uncomfortable encounters with Trump and Putin – two of the least popular world leaders (according to a recent Pew poll, they enjoy respectively 22 and 27 percent support internationally, while Angela Merkel by comparison – 42 percent). And it was entertaining to watch the G20 leaders gathering and chatting amicably, while Putin and Trump went straight to their respective seats, faces buried in their papers, in intense preparation for their speeches.

But even more interesting was the long-awaited personal meeting between the two.

The day before, Trump had surprised many by visiting Warsaw (the capital of Poland, where Putin enjoys about four percent support) and denouncing Russia’s interference in the domestic affairs of Eastern Europe. During his speech there, he referred to Poland’s fate in the beginning of World War II when both Germany and the USSR invaded it.

This historical fact is as important to the Poles and their national memory, as it is painful to today’s Russian authorities (political commentators close to Kremlin like to interpret this fact as the USSR saving Poland from Nazi invasion). In other words, Trump’s speech in Poland was supposed to demonstrate that despite all speculation, the US would continue to back its European allies and defend them from Russian aggression.

In this sense, Putin’s showing up at the G20 and meeting Trump produced the same discomforting feeling as when the ex-lover of the bride shows up to her wedding. And this uncomfortable sentiment only increased as the meeting went on. In the beginning, their meeting was supposed to last only a half-hour, but it stretched to two, and even Melania Trump was not able to put an end to it.

After the encounter, Secretary of State Rex Tillerson described it as “clear positive chemistry”. Indeed Putin does know all about chemistry (you can ask Syrian civilians and the relatives of Alexander Litvinenko about that), but Trump could not have continued the bromance, even if he wanted to, for the risk of facing more criticism at home.

Especially awkward was the conversation on the cyberattacks of last year. After the meeting, Tillerson told journalists that Trump and Putin had a “very robust and lengthy exchange on the subject”, and that Trump “pressed President Putin on more than one occasion”. In response, Putin asked for proof that the cyberattacks were linked to Russia and denied involvement, according to Tillerson’s words.

Russian Foreign Minister Sergey Lavrov, however, related this exchange a bit differently: “US President Donald Trump (and I’m sure either he or Secretary of State Tillerson would say this themselves) said that this campaign has acquired a rather strange character, because these accusations have been raised for so many months, despite no evidence being put forward. […] US President Donald Trump said that he has heard Putin’s clear statements that this is not true and that the Russian authorities did not meddle in these elections. He said that he accepts these statements.”

A bit later Putin himself declared that Trump has agreed with his arguments that the Kremlin has no relation to hackers attacking the US. Meanwhile, US Ambassador to the UN Nikki Haley interpreted the situation differently: “What [Trump] did was bring up right away the election meddling, and he did that for a reason. One, he wanted him to basically look him in the eye, let him know that yes, we know you meddled in our elections,” she said in an interview with CNN. When asked why the US president would not himself confirm that, she answered: “You can ask him.”

Regardless of who’s presenting more accurately the truth, Putin’s meeting with Trump differs clearly from others he has had with state leaders, like for instance that with French President Emmanuel Macron (who was also the victim of a hacking campaign). After the meeting Macron was tough on Russia Today journalists and the Russia-sponsored misinformation campaign.

Trump, himself, made a very terse comment about the encounter, describing it as a “tremendous meeting” and then later on tweeted “I strongly pressed President Putin twice about Russian meddling in our election. He vehemently denied it. I’ve already given my opinion…”

But beyond the hacking discussions, did the two leaders manage to agree on anything?

According to Lavrov, the two presidents agreed on the creation of a de-escalation zone in southern Syria, where starting July 9 there will be a formal ceasefire. Russia and the US took it upon themselves to ensure that all armed groups abide by it. This is not much of a positive development for Syria, since it is only a local ceasefire covering a small part of the country. It is also doubtful that Russia and the US will be able to make sure it is observed. By contrast, more important substantial questions, such as the establishing of no-fly zones, were not really addressed.

On the question of Ukraine, the US announced the appointment of a special representative to help resolve the crisis. Apart from that, the two sides agreed to establish a communications “channel” between Russia and the US to regulate the application of the Minsk agreement. In other words, there was no positive progress on the Ukraine question either.

In the end, the US and Russia agreed to create a bilateral working group to focus on cyberthreats, according to Lavrov’s words. That coming after Washington’s hacking accusations sounds like a mockery. It’s a bit like: “You stole my purse, give it back!” – “You don’t have evidence that I did it!” – “OK then, let’s cooperate on fighting against petty thieves.”

For objectivity’s sake, we should admit that Trump is not the first US president to fall into this trap. Barack Obama, who started his presidency by criticising Russia’s human rights violations, ended up creating a US-Russia working group on civil society in the late-2009. The group was headed by Michael McFall on the US side, and on the Russian – by Vladislav Surkov, the same man who in the Kremlin is responsible for the suppression of the opposition and control of civil society (clearly, this working group did not usher in a democratic episode in Russia).

Although the meeting ended with nothing achieved on both sides, Putin still came out as the winner. For him, the meeting itself was more important than the result. The leader of the most powerful country in the world shook his hand and agreed with him on a few inconsequential policies prompting not a word of public criticism.

Clearly, this is a form of international legitimisation, which was badly needed after all the hacking scandals, the war in Ukraine, and the chemical attack in Syria. Footage from this meeting was broadcast on Russian TV channels 24 hours, as if it were a final game in the World Cup we had just won.

The question whether this meeting will have any international consequences still remains. Trump and Putin continue to be the least trusted world leaders who are failing to control the situation in Syria, failing to resolve the crisis in Ukraine and in general do not really have much to cooperate on. Trump cannot really revoke the sanctions against Russia (the Congress would not allow him to) and he’ll continue to avoid this topic. And Putin does not have much to offer either.

All that said, Russian TV propagandists will have to resign themselves to the fact that criticising Trump on air is still forbidden.

About Writer: Roman Dobrokhotov is a Moscow-based journalist and civil activist. He is the editor-in-chief of The Insider.