The World Must Do More Against Terrorism: Pakistan Army Chief Gen. Bajwa Says 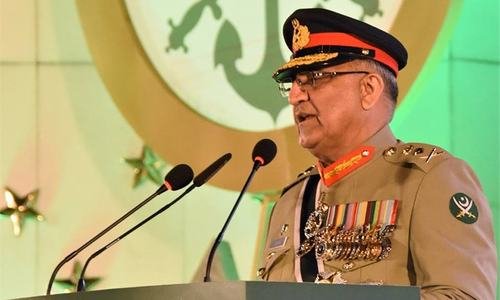 Gen Qamar Javed Bajwa, Chief of Army Staff (COAS) of Pakistan called on the world to “do more” against terrorism at a tribute to the martyrs of the 1965 war on Pakistan’s 52nd Defence Day at General Headquarters on Wednesday.

“Despite all our efforts, our countless sacrifice and over decades of war, we are being told that we have not done enough against terrorism,” the army chief said, referring to recent criticism by United States (US) President Donald Trump over Pakistan’s alleged inaction against terrorist ‘safe havens’.

“If Pakistan has not done enough in this war, then no country in the world has done anything,” he asserted.

“Only Pakistan has seen this level of success with such limited resources. From Operation Sher Dil, to Rah-i-Rast, Rah-i-Nijat, Zarb-i-Azab and now Radd-ul-Fasaad, we have paid for each inch [of gains] with our blood.”

“And now, I say that the world must do more.”

“We don’t want aid, we want your respect and confidence,” the COAS said, responding to US claims that they had given “billions and billions of dollars” in aid to Pakistan. “Our actions and sacrifices should be appreciated.”

“We will encourage actions by America and Nato that will bring peace to Afghanistan specifically and the region at large. But we also wish for our security concerns should also be resolved,” he added.

“We have tried to help Afghanistan beyond our capabilities, but Afghanistan’s war cannot be fought in Pakistan. We have made well-intentioned eforts for talks and peace in Afghanistan. However, Afghanistan is a self-sufficient country that is free to make its own decisions. If even today they veer towards war, then we cannot be a part of this war,” the army chief maintained.

“We wish to have mutually respectful relations with all countries. If other countries cannot help us fight against terrorism then they should at least not hold us responsible for their own failings.”

“Let us create a Pakistan where the use of strength is in accordance with the law and Constitution and is in the hands of the state.”

“I would like tell misguided people that whatever you are doing is not jihad but fasaad. Your country and your people are being hurt the most by your actions,” the army chief cautioned.

“Not only is the entire country paying the price of the fire of you have set, but our enemies are also taking advantage of the situation… A monopoly over violence should only be the prerogative of the state.”

“We are keeping a close watch on the designs of our enemies especially as they attempt to destroy the peace in Balochistan,” he cautioned.

“Pakistan is a peace-loving country, and Pakistanis have, despite 40 continuous years of discord, retained their identity and unity. Larger countries with more resources than us have broken,” he said.

“India should realise that the peaceful struggle of hundreds of thousands of youth in Kashmir does not need interference from Pakistan or Azad Jammu and Kashmir. It is in India’s favour that they prioritise political and diplomatic solutions for sustainable resolution of the Kashmir issue instead of insulting Pakistan and using force against Kashmiris.”

“Pakistan is a responsible nation. We did not bring nuclear weapons to South Asia. And even now these weapons are simply a guarantee of peace in answer to a neighbouring country which is high on power. It is this country which has brought unconventional war to the South Asian region,” he said.

“Since 1971 Pakistan has remained a victim of terrorism. We have paid the price for the wars started by super powers in the form of terrorism, extremism and economic loss. We are abiding by our policy that we will not allow our soil to be used against any country, and expect the same of other countries.”

“For our complete success in the war against terrorism, we need the nation’s passion and cooperation,” he told the audience.

“Although the army can end terrorism, to gain control over terrorism and extremism it is necessary that every citizen is a soldier of Operation Radd-ul-Fasaad,” he maintained.

He reminded the audience that the war against terrorism is also an ideological war.

“We are proud of both the green and the white of our flag. Our beliefs, our faith and our traditions don’t need a stamp of approval from anyone. National unity is the need of the hour, and we will not tolerate anyone shaking our foundations on the basis of religious, sectarian or caste differences.”

The army chief also paid tribute to Pakistan’s martyrs and their families, and vowed to take the war against terrorism to its logical conclusion.

Sheheryar Munawar, Sana Javed, Farooq Hassan and Sadia Afzal were among the celebrities hosting the event.Singer Atif Aslam opened the ceremony with a patriotic song, as a video paying tribute to the armed forces played in the background.

A short film showing the families of martyred soldiers remembering their sons left members of the audience in tears. Activist and motivational speaker Muniba Mazari was among those who spoke at the ceremony.

Other entertainers also took the stage as the night progressed, and a series of short films and videos were shown to the audience.

Earlier today, Defence Day was commemorated with traditional fervour and solemnity across the country, beginning with special prayers for the progress and prosperity of Pakistan.

Change of guard ceremonies were held at the mausoleums of Allama Iqbal in Lahore and Quaid-i-Azam in Karachi, and a ceremony at the Pakistan Navy headquarters in Islamabad.

Former army chief retired Gen Raheel Sharif reached Lahore’s Miani Sahib graveyard, where he laid a floral wreath on the grave of his brother Maj Shabbir Sharif who lost his life during the 1971 war on Dec 6 in the Sulemanki Sector.

Doha, 25 June 2022 THE Embassy of Nepal and the Non-Resident ...
END_OF_DOCUMENT_TOKEN_TO_BE_REPLACED