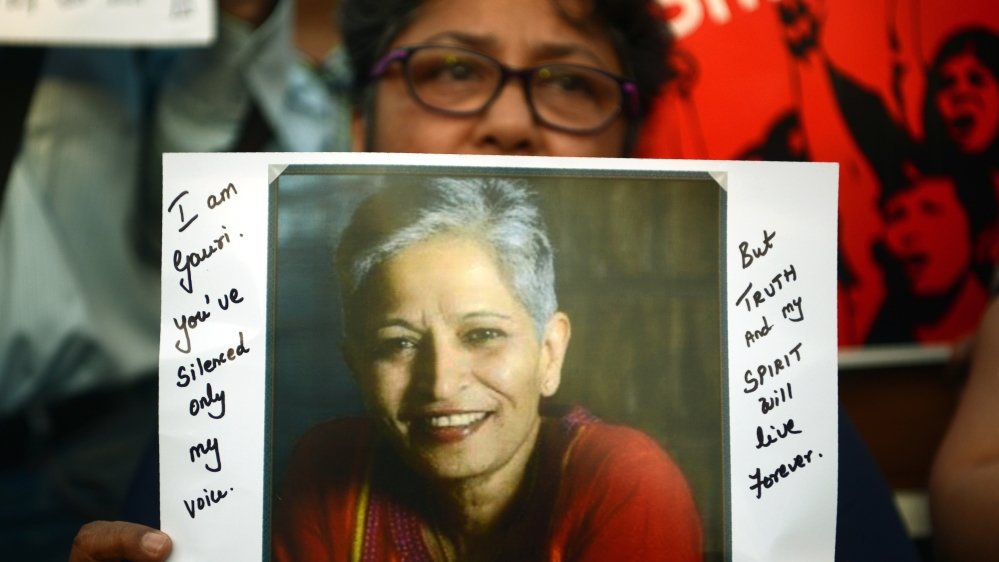 Slain journalist Gauri Lankesh was today held up as a symbol of free speech and dissent, as journalists and activists warned against treating her killing as an isolated incident.

The murder of the editor of Kannada publication ‘Gauri Lankesh Patrike’ should be seen in the context of a climate of “hate and intolerance” in the country, speaker after speaker said at a condolence meeting attended by hundreds at the Press Club of India here.

Voices in the nearly two-hour-long meeting

also expressed concern over the reaction in social media from a section that greeted Lankesh’s chilling murder with glee and tasteless jibes at the political views she held.

“The voices that were celebrating Lankesh’s killing are products of the political climate that has been created. We have created a society where it smiles around your corpse,” said television journalist Ravish Kumar.

Members of the media fraternity, including the Editor’s Guild, as well as rights organisations and student actvists, condemned the incident, describing it as a brutal assault on the freedom of the press.

Veteran journalist H K Dua said it had to be kept in mind that Lankesh was killed as she dissented against the “prevailing philosophy” and fought for the right to free speech and the right to report.

The issue of celebratory tweets after Lankesh’s killing by social media hate mongers, who were followed on Twitter by Prime Minister Narendra Modi, was also repeatedly flagged by the speakers.

They also criticised the Congress government led by Siddaramaiah in Karnataka for having “failed” to bring the assailants of rationalist scholar M M Kalburgi to book till date and also referred to the lack of progress in cracking the murder cases of CPI leader Govind Pansare and rationalist Narendra Dabholkar in Maharashtra.

Pansare’s daughter Megha, who was among the speakers, said the probe into her father’s death picked up a little only when the Bombay high court intervened and directed the CBI to redouble its efforts to trace the culprits.

Yechury called for a larger campaign against the “eerie pattern” of assaults and killings while Raja said the incident pointed towards the emergence of “fascism” in India.

The presence of politicians triggered some unease among a section of journalists with television anchor Rajdeep Sardesai stressing the need to ensure that netas should not “hijack” such events.

His view found takers among many others, though there were some who believed that if politicians had come to support the cause of journalists, they should be welcomed.

Kanhaiya, who said Lankesh was a mother-fgure to him, referred to the slander campaign against her on the social media, where she has been described by many as a Maoist ideologue.

“Today those who proudly proclaim their allegiance to a brand of hyper-nationalism should remember that in future they can also be in the line of fire,” he said, while political activist Yogendra Yadav held that Lankesh was silenced as she stood for a “culturally rooted secularism”.

An outspoken critic of Hindutva politics, Lankesh, 55, was shot dead by unidentified assailants at the entrance of her residence in Rajrajeshwari Nagar in Bengaluru last evening.

Lawyer Vrinda Grover, who was present at the protest meet, expressed her horror over the killing, and said, “We are living in very dangerous times”.

“This was not a one-off, random case. Lankesh was killed because she stood and fought for ideas of justice and values enshrined in our Constitution — liberty, equality,” she said.

Many spoke about the urgent need to fight intolerance.

“This is not good. We cannot go on gathering at condolences,” Ravish Kumar rued.

Student leader Kanhaiya stressed that the times were difficult for journalists and activists.

English Daily ‘The Hindustan Times’ reports Karnataka Police is tracing the killers of senior Kannada journalist, Gauri Lankesh, a critic of Hindu extremism, who was shot dead at her house in Bengaluru on Tuesday evening.

“The three special teams set up to crack the case are on the lookout for the suspected assailants. We are taking the movements of people and vehicles at check posts and inter-state borders,” deputy commissioner of police (West) M N Anucheth told IANS in Bengaluru.

According to the police, at least three suspects were involved and Lankesh was found dead on her verandah around 8pm with bullet wounds to her head and chest. Television reports said seven bullets were fired at her and three hit her.

Lankesh, 55, was the daughter of famous poet-turned-journalist P Lankesh. She was the editor of Gauri Lankesh Patrike, writing often against Sangh organisations and communal violence in the country.