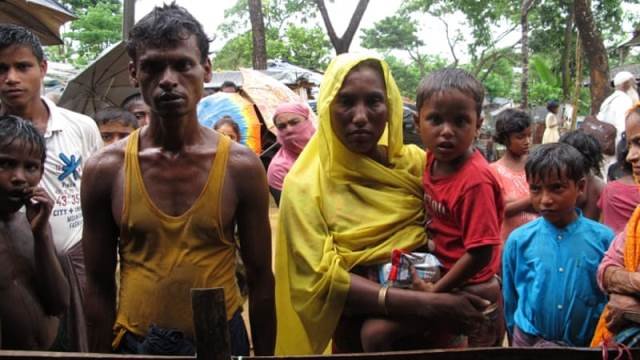 Rohingya activists have accused Aung San Suu Kvi of “denying their existence”, after Myanmar’s leader failed to mention a humanitarian crisis that has seen the exodus of more than half a million refugees to Bangladesh since August.

In a speech on Monday, Aung San Suu Kyi said the world is facing new threats partly because of illegal immigration and the spread of “terrorism”, drawing criticism that she is trying to divert attention away from the Rohingya crisis.

“Today we are facing a new period of global uncertainty and instability,” Aung San Suu Kyi said at the 13th Asia-Europe Meeting (ASEM) of foreign ministers in Naypyidaw.

“Conflicts around the world are giving rise to new threats and emergencies: illegal immigration, spread of terrorism and violent extremism, and even the threat of nuclear war.”

In August, a fierce military crackdown, in the wake of attacks on army posts, sent more than 600,000 Rohingya Muslims fleeing what the United Nations has described as “textbook ethnic cleansing” in Myanmar’s northern Rakhine State.

Described as the “world’s most persecuted minority”, the Rohingya have suffered decades of discrimination and abuse at the hands of Myanmar’s army and have been denied citizenship since 1982.

Many Buddhists in Myanmar believe that Rohingya are Bengali who migrated to the country illegally during the British rule in the subcontinent.

Reacting to Aung San Suu Kyi’s speech, Ro Nay San Lwin, a Rohingya activist based in Germany, said her statement was nothing but a “denial of our existence”.

“Rohingya were recognised as citizens after independence in 1948. Our citizenship was snatched in 1982 by the military regime,” he told Al Jazeera.

“When Suu Kyi’s party, National League for Democracy (NLD), was established in 1988, many Rohingya supported her,” he added.

“The NLD issued IDs that mentioned the word Rohingya,” he said, adding that four Rohingya stood in the 1990 parliamentary elections on the ticket of Aung San Suu Kyi’s party.

Al Jazeera’s Tanvir Chowdhury, reporting from the border town of Cox’s Bazar in Bangladesh where most of the fleeing Rohingya have taken shelter, said the Myanmar leader’s speech was seen by many as a “calculated move”.

“She is trying to change the main discussion from the Rohingya humanitarian crisis and the issue of ethnic cleansing to the crisis of immigration and terrorism,” added Chowdhury.

“She is trying to please the military, which controls the borders, defence and interior ministry.”