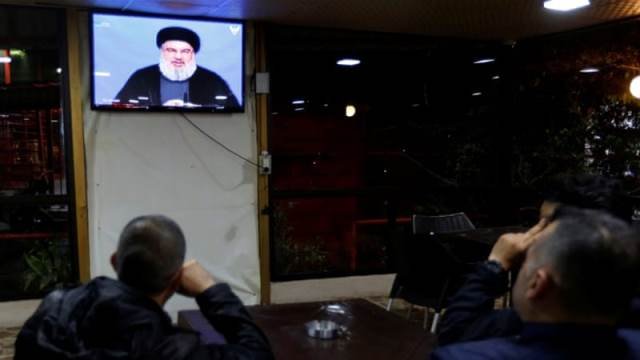 Hezbollah leader Hassan Nasrallah has has rejected claims made by Arab foreign ministers that the Lebanese group is arming rebels in Yemen.

In a televised speech on Monday from Beirut, Nasrallah, whose Shia group is represented in the Lebanese parliament and has a strong military wing, called the claims made at the previous day’s Arab League meeting “ridiculous”.

Referring to a paragraph in the final statement made after the meeting in Cairo, which accused Hezbollah of “supporting terrorism and extremist groups in Arab countries with advanced weapons and ballistic missiles”, Nasrallah said there was no proof for such claims.

Saudi Arabia has accused Hezbollah of playing a role in the November 4 firing of a ballistic missile by Yemen’s Iran-allied Shia Houthi rebels towards the King Khaled International Airport outside Riyadh.

“We have not sent any ballistic missiles or advanced weapons – not even guns – not to Yemen, not to Bahrain, not to Kuwait, not to Iraq … or any Arab country,” Nasrallah said, adding that Hezbollah does not own ballistic missiles.

The only places that Hezbollah has sent weapons to were Palestine and Syria, he said.

Nasrallah’s speech comes amid heightened tension between Iran – Hezbollah’s ally – and Saudi Arabia since Saad Hariri’s surprise resignation in Riyadh as Lebanon’s prime minister, just hours before the missile fired by the Houthi rebels was intercepted near the Saudi capital.

Hariri, a Sunni politician and ally of Saudi Arabia, cited Iran’s “grip” on his country and threats to his life as the reasons for his resignation.

The special summit in the Egyptian capital on Sunday was requested by Saudi Arabia to discuss alleged “violations” committed by Iran in the Arab region.

At the meeting, Adel al-Jubeir, Saudi foreign minister, said Iran was aiming “to destabilise and fuel sectarian rift” in the region “and to drive a wedge between ourselves and our people”.

“Iran has arms in the region, the largest of which is Hezbollah,” said Khalid bin Ahmed, adding that Iran threatened the security of Arab states.

Referring to the November 4 missile incident near Riyadh, Nasrallah said: “I spoke of this before, but some did not understand: no one from Hezbollah had any responsibility in this. The problem with Saudi Arabia is that they don’t understand that Yemenis have brains and are strong and can produce their own weapons.”

He went on to condemn the Saudi-led coalition in Yemen, saying: “Call on Saudi Arabia to halt its massacres.”

Despite waging a military offensive in Yemen for more than two years now, the coalition has so far failed to achieve its stated aims of dislodging the Houthi rebels from the capital, Sanaa, and the country’s north.

The war has taken a huge toll on the country: More than 10,000 civilians have been killed and millions of Yemenis have been left without basic necessities.

In the context of the ongoing war against the Islamic State of Iraq and the Levant (ISIL), Nasrallah said on Monday that the armed group’s era would be over when its fighters are removed from the Syrian border town of al-Bukamal.

“This does not mean that Daesh is over, but the infrastructure of Daesh is over,” he said, using the Arabic acronym for ISIL, also known as ISIS.

Nasrallah, whose fighters are battling anti-government groups in Syria, said he is willing to pull Hezbollah out of neighbouring Iraq once the central government announces victory over ISIL in that country.

Al Jazeera’s Zeina Khodr, reporting from Beirut, said Nasrallah’s comments on ISIL “have to be viewed within the context of Hariri’s resignation, who said he would be ready to withdraw his resignation if Hezbollah disengages itself from regional conflicts”.

She said it is possible that he is “trying to open the door to a compromise so that Hariri can withdraw his resignation and there could be some sort of a national agreement in Lebanon”.