Why the Relationship Between Pakistan and America is So Confusing 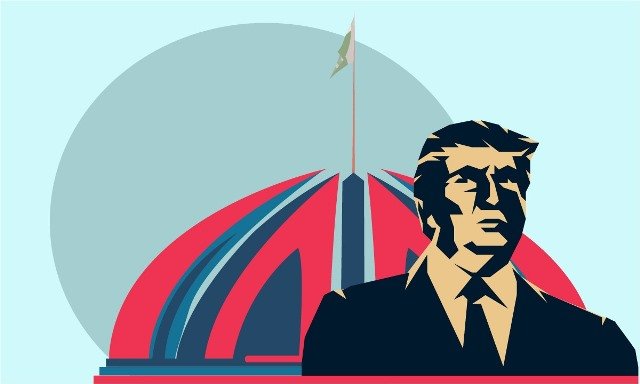 If there is one song that best describes this relationship, it’s Land of Confusion, the 1980s hit from the band Genesis. Because when it comes to this perplexing partnership, one never truly knows what is going on. The developments of recent days provide a sobering case in point. After several weeks of rocky relations following the announcement of Donald Trump’s new Afghanistan strategy – which called on Islamabad’s bitter enemy, India, to play a greater role on Pakistan’s western flank – the relationship appeared to stabilise with a logic and order as surreal as it was reassuring.

First came Pakistan’s rescue of a Canadian-American family from the clutches of the Haqqani network. Then came several drone strikes in Afghanistan that, we were told, eliminated Jamaat-ul-Ahrar leader Omar Khalid Khorasani, the mastermind of many mass-casualty attacks in Pakistan.

It was seemingly a case of two feuding factions burying the hatchet: Pakistan helping recover the Canadian-American couple and their children, and America reciprocating by removing one of Pakistan’s most-wanted terrorists. This is the transactional nature of Pakistan-America relations, in all its glory: you do this, I’ll do that. And, with a famously transactional businessman in the White House, a strong indication of the relationship’s likely trajectory.

If only things were that simple.

Reports soon surfaced that Pakistan may have rescued the family not out of the goodness of its heart, but only after heavy pressure – and with Navy SEALS on standby – from Washington. Reports also emerged that Khorasani wasn’t killed after all. But we did receive confirmation that another Pakistani Taliban leader, Umar Mansoor, is dead — but this more than a year after he was supposedly killed in a drone strike.

Ultimately, recent events don’t change the tense state of play of Pakistan-America relations. Washington’s policy toward Pakistan has become singular in approach: it wants Islamabad to eliminate terrorist safe havens on its soil used to target Americans in Afghanistan. For an ‘America First’ president dead set on protecting US interests abroad at all costs, this is a perfectly predictable policy.

Pakistan, like any nation, no matter how weak or strong, has national interests. These interests – driven by a need to push back against India, which the Afghan Taliban and Haqqani network also aim to do in Afghanistan – make crackdowns against them unlikely.

Compounding the challenges for Pakistan-American relations is that each side’s claims and demands are contradictory and even unfair. America somehow wants Pakistan to crackdown on the Afghan Taliban while simultaneously urging the group to come to the negotiating table. The recent resumption of the Quadrilateral Coordination Group is a reminder that, despite Trump’s security-oriented Afghanistan strategy, the administration still supports the idea of reconciliation in Afghanistan.

Pakistan, meanwhile, insists it need not ‘do more’ in the ‘war on terror’ given all the sacrifices it has made and all the terrorists it has killed. It’s a fair point. Except Washington believes that Pakistan hasn’t done nearly enough about the terrorists that threaten America the most. As for Islamabad’s demand that America go after Pakistani Taliban leaders in Afghanistan? This is already happening, as evidenced by the hit on Mansoor.

Where does this leave us? For all the talk of Washington tightening the screws on Pakistan, coercive American tactics risk provoking Pakistani retaliations, from shutting down North Atlantic Treaty Organization’s (Nato) supply routes to suspending intelligence cooperation, that could imperil US interests.

This means that possibly the most draconian US measures – sanctioning individual Pakistani security establishment officials, revoking Pakistan’s non-Nato ally status or designating Pakistan a state sponsor of terror – are likely to be set aside, at least for the short-term. Then again, maybe not. In the land of confusion known as Pakistan-America relations, nothing is ever what it seems.

The article was originally published in the Herald’s November 2017 issue. To read moresubscribe to the Herald in print.

The writer is a deputy director and senior associate for South Asia within the Asia programme at the Woodrow Wilson International Center for Scholars in Washington, DC.