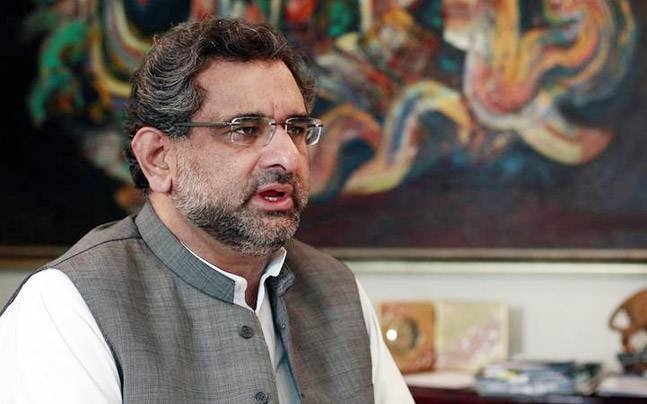 Prime Minister Shahid Khaqan Abbasi on Friday called for the formation of a special committee to investigate the allegations of harassment levelled against Pakistan Tehreek-i-Insaf (PTI) Chairman Imran Khan by MNA Ayesha Gulalai.

The premier was addressing the National Assembly shortly after his cabinet took oath at a ceremony at the Presidency. Following the ceremony, Abbasi presided over a meeting of the newly formed cabinet.

Abbasi, in his address to lawmakers, called for the formation of a special committee to probe the allegations against Khan in-camera and suggested that the committee present a report before the House after its investigation so that the “matter can be closed”. The assembly passed the motion and directed the committee to submit its report within a month.

He assured both the accused and the accuser they would be respected, adding that the PTI chief had the “right to defend himself”.

Abbasi also promised round-the-clock protection for MNA Gulalai after she claimed on television that she was scared for her life.

While announcing her departure from PTI earlier this week, Gulalai had accused Khan and his “gang” of having an “immoral character”.

The MNA from Waziristan alleged that Khan “would forward inappropriate and explicit text messages to party women”, claiming that she received the first such message in 2013.

Debate in the assembly
Reacting to the call for a committee, PTI’s chief whip Shireen Mazari said that if investigations were to be conducted, they should start with the newly appointed foreign minister, Khawaja Asif, as he had passed offensive remarks against her on the floor of the assembly.

Last year in June, Asif had used derogatory language to refer to Mazari, saying “Someone make this tractor trolley keep quiet” when she and some other lawmakers protested to a speech he was delivering in the assembly.

During Friday’s session, Mazari said that Asif had not apologised to her after the incident, questioning why female members of the PML-N had not raised their voices on her behalf at the time.

“If Ayesha Gulalai has proof, she should come forward with it. She does not have proof,” Mazari added.

PML-N MNA Marvi Memon, on the other hand, paid tribute to Gulalai and thanked her for bringing the “reality before the country”. Memon said that Gulalai had given a “voice to those who have remained silent”.

“If a man had raised the matter, it would have been a different thing; a female [member] of the PTI has raised this issue,” Memon said, refuting PTI’s claims that Gulalai was being used by the PML-N to malign the party.

MNA Nafeesa Shah of PPP also addressed the House, saying that Khan had a right to defend himself in the matter. She questioned if the PTI would take any action against the party workers who had targeted Gulalai’s sister.

Another PPP MNA, Shagufta Jumani, came to Gulalai’s defence. “If such matters keep coming up, women will be forced to sit at home.”

PTI and PML-N’s war of words
Gulalai’s allegations against Khan caused a furore among party members and deepened an existing rift with the ruling PML-N, with PTI accusing them of allegedly masterminding a ploy to malign the PTI chief.

Additionally, when Gulalai first announced she was parting ways with the PTI, speculation was rife that she would be joining the PML-N following rumours that she had held a recent meeting with PML-N leader Amir Muqam.

The ruling PML-N, as well as PPP, have backed Gulalai’s allegations against Khan, and have called for an investigation into the matter.

Earlier on Friday, Railways Minister Saad Rafique announced that PML-N has decided to file a review petition against the Supreme Court judgement in the Panama Papers case in which Nawaz Sharif was deemed “unfit to hold office”.

The minister was speaking to the media shortly after the new cabinet was sworn in.

Rafique said that Nawaz Sharif reserves the right to file a review petition after a five-judge SC bench disqualified him for being “dishonest”.

He added that since the verdict, Sharif has become an even more “dynamic” political personality.

“Keeping politics aside, we believe that severe allegations have been levelled against Khan,” Rafique said.

He chided the PTI chairman, saying that Khan calls for politicians to resign over the smallest of issues, [but] “where are his dialogues now?”

“He has no shame,” Rafique added.

The minister called on Khan to present himself before an investigative committee, “instead of levelling allegations against a woman to create [his] own counter-narrative.”

“Come and face the matter and prove [that allegations against you are not true],” Rafique challenged the PTI chief.

Following Gulalai’s claims, PTI has vehemently denied the allegations, saying that the former PTI member’s accusations were part of the PML-N’s efforts to malign Khan and his party.

In an interview with a private news channel on Thursday, Khan had said that the accusations had taken him by surprise. He suspected that the PML-N had used Gulalai and their “old smear tactics” to achieve their own ends.

Doha, 25 June 2022 THE Embassy of Nepal and the Non-Resident ...
END_OF_DOCUMENT_TOKEN_TO_BE_REPLACED