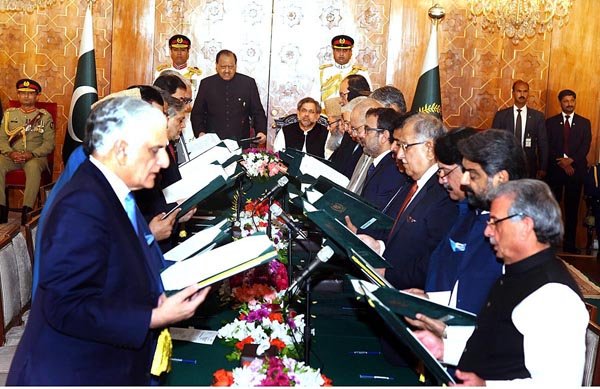 President Mamnoon Hussain Friday administered oath of office to the new Federal Cabinet
that would run affairs of the State under the newly elected Prime Minister Shahid Khaqan
Abbasi.

Following two days of back to back meetings with Muhammad Nawaz Sharif, the former
Prime Minister, at Murree, the new 43-member Cabinet comprising 27 Federal Ministers and
16 Ministers of State took their oath of office here at the Aiwan-e-Sadr at an impressive
ceremony.

The event that began with the playing of the national anthem was followed by recitation
from the Holy Quran. The Ministers took oath of office in two groups.

Following is the list of the new Cabinet members;

The Minister of State include;

The portfolios of the Ministers and Ministers of State would
be announced later.

The President later hosted a reception in honour of the new Cabinet members.

The meeting was attended by the newly inducted 43 members; including 27 federal ministers and 16 ministers of state.

Shahid Khaqan Abbasi took oath of his office Thursday as the country’s 28th Prime Minister after the disqualification of Muhammad Nawaz Sharif by the Supreme Court of Pakistan.

The new Cabinet ministers have expressed their resolve to carry on the development agenda pursued by the Pakistan Muslim League (Nawaz) and the vision of Muhammad Nawaz Sharif.