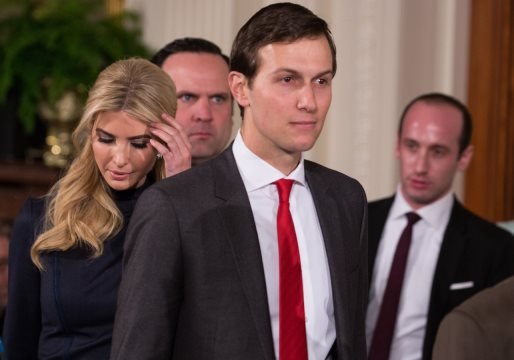 US daily ‘New York Times’ and other media houses reported today that Jared Kushner, President Trump’s son-in-law and a close adviser will appear before US Senate Investigation Committee as part of their broad inquiry into ties between Trump associates and Russian officials or others linked to the Kremlin, according to administration and congressional officials.

The Senate investigation is proceeding on a separate track from the F.B.I. investigation while drawing on some of the same material, like routine electronic surveillance of the Russian ambassador and his embassy cohort. The committee chairman, Senator Richard M. Burr, Republican of North Carolina, has told the White House he plans to interview all Trump aides who had contact with Russian officials, according to White House officials. Depending on those interviews, some may be called upon to testify in closed-door sessions.

The Senate panel’s decision to question Mr. Kushner would make him the closest person to the president to be called upon in any of the investigations, and the only one currently serving in the White House. The officials who initially described that Senate inquiry to The New York Times did so on the condition of anonymity in order to speak candidly about Mr. Trump’s son-in-law.

The F.B.I. declined to comment. There are no indications that Mr. Kushner is a focus of its investigation, and Ms. Hicks said he had not been questioned by the bureau.

Kushner was born in Livingston, New Jersey, and is the elder son of Seryl Kushner and real estate developer Charles Kushner. His paternal grandparents, Rae and Joseph Kushner, were Holocaust survivors who came to the U.S. from Poland in 1949; Joseph became a prominent real estate businessman. He has a brother, Joshua (also a businessman), and two sisters, Nicole and Dara. He is also a nephew of Murray Kushner, the owner of Kushner Real Estate Group. Kushner Real Estate Group is separate from Kushner Companies, which Murray Kushner started in 2000.

Kushner was raised in a Modern Orthodox Jewish family in New Jersey. He graduated from the Frisch School, a private, coed yeshiva high school in 1999. According to Risa Heller, a spokeswoman for Kushner Companies, he was an honors student and a member of the debate, hockey, and basketball teams while at Frisch.

In 2007, Kushner graduated from New York University where he earned a J.D. and M.B.A.; his father had previously made a $3 million donation to NYU in 2001. He interned at Manhattan District Attorney Robert Morgenthau’s office and Paul, Weiss, Rifkind, Wharton & Garrison LLP.