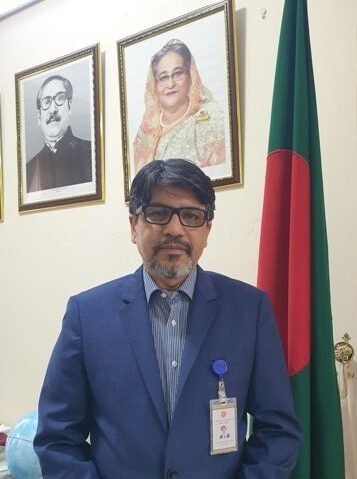 Ambassador of Bangladesh to Qatar HE Md. Jashim Uddin has hinted that the second round of talks on State Minister of Foreign Affairs level between Qatar and Bangladesh will be held in Doha soon as the dates are under final consideration. The first round of the talks was held in Dhaka in February 2020. The Bangladesh ambassador also hopes to witness high-level visits from Qatar to Bangladesh in the near future.

Talking to Qatar Tribune, the envoy, who arrived in Doha in August 2020, described the bilateral relations between Qatar and Bangladesh as “close and brotherly”, stressing that both the countries have common stand on regional and internationals issues and support each other, including on the Rohingya refugees issue and on candidatures for various world bodies.

He said there is a great potential to enhance bilateral relations in various sectors between the two countries, especially in education, health, investments, defence, culture and tourism.

He said that Bangladesh recently appointed defense attaché in Qatar.

The present bilateral trade between the two sides is over $1 billion, with balance of payment in favour of Qatar being major exporter of LNG to Bangladesh. The ambassador pointed out that the export volume from Bangladesh to Qatar stands at around $50 million and has wide possibility to increase, noting that he has held meetings with Qatar Chamber and efforts are being made for joint meetings and exchange of visits between the business communities in both countries once the pandemic situation gets better.

He lauded the role of Bangladesh community, particularly Bangladesh Forum Qatar, as a bridge between Qatar and Bangladesh, appreciating the initiative taken by the forum to hold ‘Made In Bangladesh’ mega exhibitions in Qatar.

Jashim Uddin added that around 400,000 Bangladeshis are contributing to the development of Qatar, especially 2022 FIFA World Cup projects. He hinted that even with a significant number of Bangladeshi skilled workers already in Qatar, the country is ready to supply more skilled workforce to meet Qatar market requirements.

Jashim Uddin, who was recently posted to Qatar, had earlier served in places like New Delhi, Tokyo, Islamabad, Washington DC and Athens.

He said Qatar is recognised worldwide as a hub and facilitator of efforts to solve various regional issues and conflicts through dialogues, describing these efforts as another great example of the visionary leadership of the Amir His Highness Sheikh Tamim bin Hamad Al Thani. “Qatar has laid down a great example for other regional countries to follow in the event of any crisis,” he added.

He lauded the deep interest of Qatari leadership in promoting and preserving art, culture and literature through the Cultural Village Foundation (Katara); the unique and amazing world-class museums including the Qatar National Library, describing each of these institutions as great landmarks.

Islamabad, 10 Oct. 2021 Father of Nuclear and Missiles programs of ...
END_OF_DOCUMENT_TOKEN_TO_BE_REPLACED