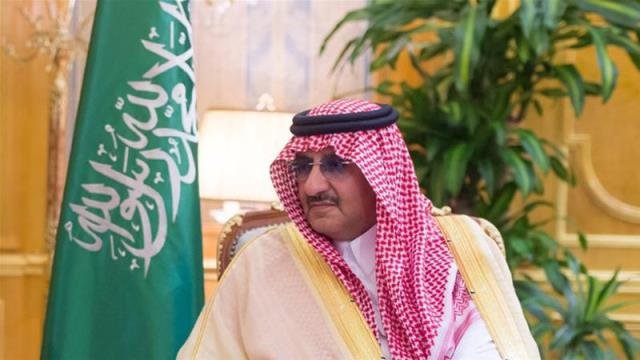 Mohammed bin Nayef, Saudi Arabia’s ex-crown prince who was removed as next in line to the throne in June, has reportedly become the latest royal family member to be targeted in the kingdom’s expanding anti-corruption crackdown.

According to Reuters news agency and the Wall Street Journal, bank accounts linked to Mohammed bin Nayef and some of his immediate relatives were frozen by Saudi authorities.

Both reports on Wednesday cited sources “familiar with the matter”. The Reuters report was also carried by Saudi state-owned media.

The freezing of Mohammed bin Nayef’s accounts came as Saudi authorities launched a new arrest campaign as part of the widening purge that began on Saturday, according to Reuters.

Dozens of royals, government officials and influential entrepreneurs have already been detained, facing a number of allegations, including money laundering and bribery.

Among those held are 11 princes, four ministers and several former ministers, in what is seen as an unprecedented crackdown that has shaken the kingdom.

Meanwhile, the number of domestic bank accounts frozen as a result of the purge is more than 1,700 and increasing, according to the reports.

The steps were the latest in a series of policies widely seen as an effort by Crown Prince Mohammed bin Salman to assert power over the country and its political and business elite.

On Saturday, King Salman bin Abdulaziz Al Saud announced that his son, the crown prince, would oversee a newly formed anti-graft commission that would purge the country of corruption.

Prince Alwaleed bin Talal, a billionaire businessman who owns investment firm, Kingdom Holding, was among those held. The list of detainees also included senior ministers who were recently sacked, such as Prince Mitaab bin Abdullah, the head of the National Guard, and Adel Faqih, the economy minister.

Mohammed bin Nayef made his first confirmed public appearance since his removal at the funeral on Tuesday for Prince Mansour bin Muqrin Al Saud, deputy governor of Asir province, according to Saudi media.

Mansour bin Muqrin died in a helicopter crash on Sunday. No cause has been given for the crash.