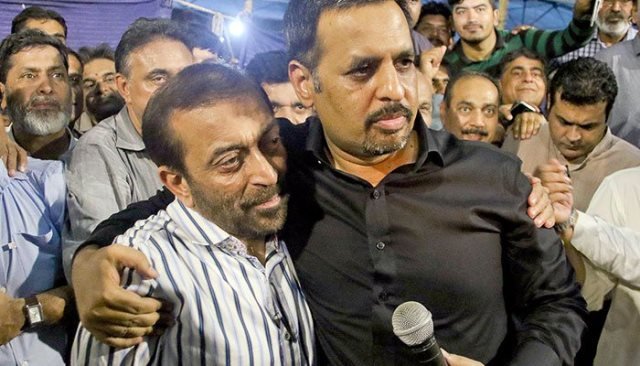 ‘Since, last eight months, on request of Farooq Sattar, establishment has been asking PSP to meet MQM-P. Mustafa Kamal said that where he was confirming of establishment role, he wanted to clarify that it is Farooq Sattar not him who is aligned with establishment. In our last joint press conference, Farooq Sattar along with his team was already present before our arrival at the venue which confirms MQM-P and establishment relation.

‘It is a plan that started on Aug 22, 2016, when Farooq Sattar was arrested by Rangers on charges of treason and kept overnight and in morning, he appeared as Chairman of the MQM-P. He said that there were five FIRs registered against Farooq Sattar on treason charges and police was searching for him and other MQM leadership who were on hiding.

“I am not an agent of establishment, otherwise, I would not leave my Senator-ship in 2013, he told media.

He said that as far as he was concerned, he enjoys close relations with the Pakistani establishment and meets almost every day but to get support in locating missing youths of not his party but of MQM who were misguided and involved in crimes.

Mustafa Kamal told that PSP has been successful in getting freed 70 MQM missing persons which MQM was not able to.  He also said that there is no single PSP member missing or arrested in any criminal case since he does not tolerate such activities.

“I will end my party and ask my workers to return home, but I will not be a part of the MQM because the MQM was and still is Altaf Hussain’s. He said that Altaf Hussain is a traitor and a Research and Analysis Wing agent. If he is working openly for RAW, he is not doing any work for his own country,” he alleged.

He accused the MQM of still being close to the party’s founder, saying that they had not once said a word against Hussain throughout the drama that unfolded this past week.

Kamal alleged that his party was accused of being establishment-backed, but it was MQM-P that was formed at the Rangers headquarters “under the supervision of then DG Rangers, Gen Bilal Akbar”.

He alleged that MQM-P leaders had been feeding “half-lies” to the media that Sattar had been kidnapped and later made to address the press conference announcing his party’s alliance with PSP. In fact, it was Sattar himself who was requesting the meetings, he said.

Mustafa Kamal referred to Farooq Sattar’s yesterday press conference where Farooq Sattar had announced MQM reservations of pushing towards wall and for using Mohajir slogan in future and fighting for Mohajir’s (immigrants) rights.

Mustafa Kamal rejected such slogans and asked Urdu language speaking community (Mohajir – Immigrants in 1947 to newly born Pakistan) that already MQM-P is holding almost all parliamentarian seats from majority settled areas in various parts of Sindh province mainly Karachi city, what MQM-P had contributed towards improving socio-economic conditions including cleaning, hygiene, water supply to drainage system – health and education  sectors. Mustafa Kamal said that creation of PSP has saved lives of the people of Karachi otherwise, MQM  slogan of Mohajir is not only creating hatred among various other communities living in Karachi but creating fear in other parts of the country if any Urdu speaking from Karachi visiting any part of the country seen as terrorist.

He said those exploiting the name of Mohajirs for their political goals are in fact the biggest enemies of Mohajirs.

The PSP chief said if he didn’t talk about the welfare of all communities, the Mohajirs would get no benefit either.

He said that Farooq Sattar has started using now his mother card to hide his deeds.’ If my mother had been alive, I would not have involved her in politics. “