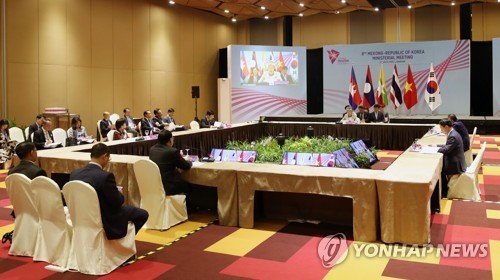 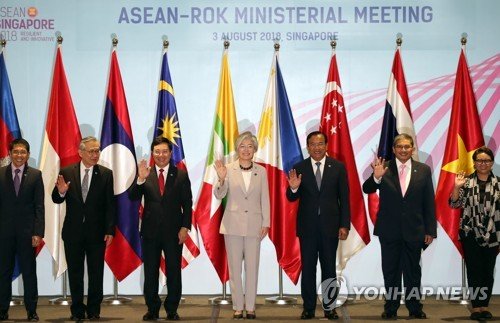 Foreign Minister Kang Kyung-wha made the offer during an annual session with her counterparts from the 10 countries in Singapore on the eve of the ASEAN Regional Forum (ARF).

The minister said it would be a chance for the “epoch-making” strengthening of substantive cooperation between the two sides.

The Southeast Asian countries welcomed Kang’s suggestion to hold the summit in her country, according to her ministry.

They will decide the specific schedule and location for the meeting when President Moon Jae-in visits here in November for the South Korea-ASEAN summit. Singapore is the rotating host of this year’s ASEAN gatherings.

“Today, ASEAN plays a central role in convening regional strategic forums, setting the agenda, and, above all, bringing world leaders together to discuss regional and global issues of common concern,” she said.

She also introduced the Moon administration’s “New Southern Policy” aimed at improving relations with the Association of Southeast Asian Nations (ASEAN), as well as India and Pakistan. The slogan is three Ps: people, prosperity and peace.

South Korea has long sought to expand partnerships with those nations as part of efforts to diversify its diplomatic and economic partnerships.

Kang emphasized her government’s approach is serious and sincere, not just rhetorical.

The ASEAN bloc, with a population of 630 million, is South Korea’s second-largest trading partner, with the two-way trade volume totaling US$149.1 billion in 2017, rising from $118.8 billion the previous year.

Kang then took part in the 8th Mekong-Republic of Korea Foreign Ministers’ Meeting, a consultation channel launched in 2011 with the aim of promoting developmental cooperation and other partnerships with five countries in the Mekong region: Myanmar, Cambodia, Laos, Thailand, and Vietnam.

She said that the countries are emerging as a “growth engine of the world’s economy.”

The two sides agreed to work to elevate their bilateral relations to a new level through the New Southern Policy.

20 January 2022 By Ashraf Siddiqui More than 7,000 books of different ...
END_OF_DOCUMENT_TOKEN_TO_BE_REPLACED