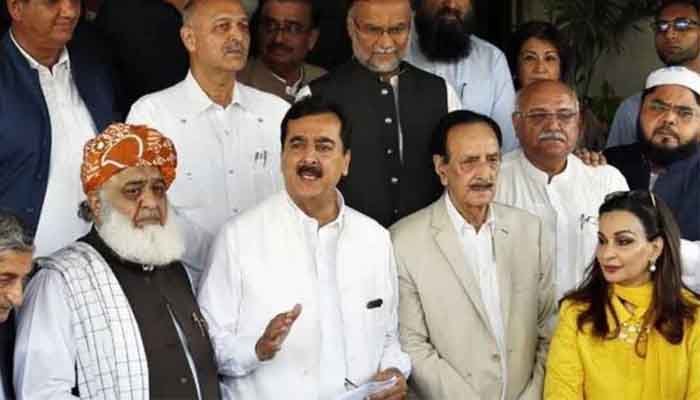 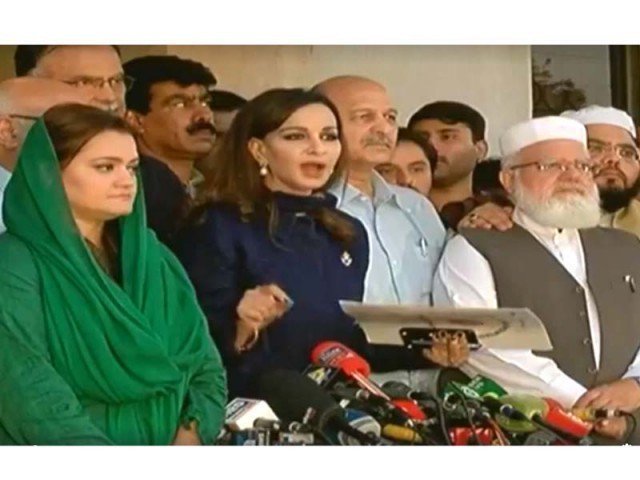 The leaders of various political parties attending the multi-party conference (MPC) have announced that they will approach the parliament for the formation of a government with their own chosen representatives.

The meeting was held in Islamabad on Thursday in the wake of the alleged rigging during the July 25 elections.

Upon the conclusion of the meeting, it was announced that a draft had been prepared by a 16-member committee, outlining the decisions that had been taken by the parties in consensus.

According to the draft, prepared by Senate opposition leader Sherry Rehman of Pakistan Peoples Party (PPP) and Pakistan Muslim League-Nawaz (PML-N) leader Mushahid Hussain, the parties have decided that the prime minister shall be appointed from the PML-N, the speaker of the National Assembly from the PPP and the deputy speaker from the Muttahida Majlis-e-Amal (MMA).

Rehman, while addressing the media, said that the parties have already rejected the election results, adding that “the mandate taken by the opposition was rigging-laden”.

Speaking on behalf of all the parties, she announced that they would “fight the puppet government” and lodge a protest within and outside the parliament.

The PPP leader added that the parties would jointly release a white paper within a few days and that a working committee had already been formed for this.

“Nadra has admitted that the RTS system was not faulty but was rather jeopardised. The level at which the elections were rigged, with one organisation having been given the right to run the process, is unacceptable,” she declared.

Moreover, Hussain said that the committee would decide the future course of action and that a meeting in this regard would be held on Friday at Rehman’s office.

ANP leader Mian Iftikhar Hussain strongly asserted that they are “stepping into the battlefield with the aim of winning” and expressed confidence that they would succeed in forming a government.

MMA general secretary Liaquat Baloch said that the parties have all come together to “protect the Constitution and democracy”, adding that they will “carry on the struggle for fair elections”.

“In a first for the country, all the parties have come together to reject the unjust elections,” said PML-N stalwart, Ahsan Iqbal.

Besides members from PML-N, PPP, and MMA, other political leaders in attendance at the conference belonged to the Awami National Party (ANP), the Qaumi Watan Party (QWP), the Pakhtunkhwa Milli Awami Party (PkMAP), and the National Party (NP).

Due to the Muttahida Qaumi Movement (MQM)’s decision to join the Pakistan Tehreek-i-Insaf in forming a government at the centre, it was not invited to attend the conference.

Additionally, members of the Balochistan National Party-Mengal and the Mustafa Kamal-led Pak Sarzameen Party (PSP) were not present at the meeting.