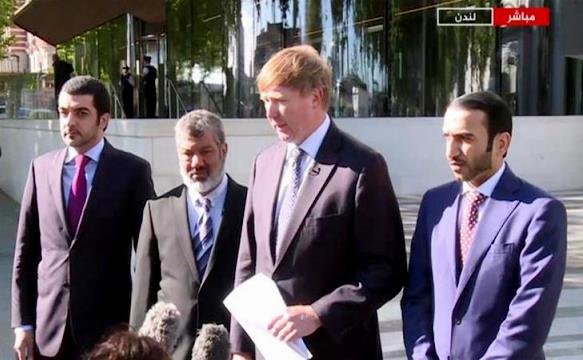 A lawyer for three Qatari men who claim to have been tortured and falsely imprisoned by the UAE has asked the UK’s Metropolitan police to investigate the accusations.

Human Rights lawyer Rodney Dixon said his clients were beaten, hung upside down, and electrocuted during their detention and later made to sign false confessions of spying by UAE officials.

He submitted the allegations against the unnamed officials to British police at their Scotland Yard headquarters in London on Wednesday morning.

Under British law, foreign officials can be investigated and charged for abuses such as torture, war crimes, and hostage taking.

Arrests can be made by British authorities the moment the accused enter UK territory.

Dixon told Al Jazeera that the accusations were “related to events in respect to three victims from 2013 until 2015.”

“In the case of one of them, he was held for 27 months in detention where he was tortured,” he said.
Hammadi was arrested in 2013 after he arrived at Dubai airport, while Mulla and Jaidah were arrested while driving to the Saudi border from the UAE.

According to their lawyer, the men had decided not to publicise their ordeal after their release in 2015 but changed their minds when UAE television broadcast footage of their confessions, which they said was fake.
The videos, which Dixon said were extracted under torture and pre-scripted, were included in anti-Qatar documentaries broadcast after the start of the ongoing GCC crisis in June this year.

Dixon said the men were determined to “clear their reputations” and wanted compensation from the UAE government for their experiences. The UAE embassy in London has been contacted by Al Jazeera for a response but at the time of publication there had not been a response.

Joe Odell of the London-based International Campaign for Freedom in the UAE, called on British authorities to thoroughly investigate the accusations. “This latest case is reflective of a much broader trend whereby foreign nationals are increasingly vulnerable to mistreatment and abuse at the behest of the Emirati authorities,” he said.

“Scotland Yard should not only conduct a thorough investigation into these latest allegations, but also numerous others which have involved the mistreatment and torture of British nationals in the UAE.