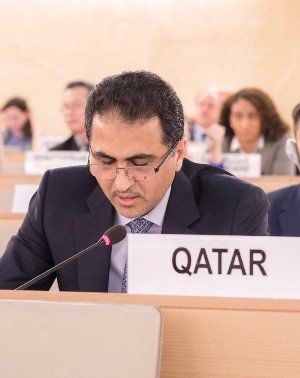 The State of Qatar called on the United Nations Human Rights Council to take an urgent action to stop the violations resulting from the unilateral coercive measures and the unjust siege imposed by a number of countries on the State of Qatar, and to end the ongoing and increasing suffering of those affected by siege.

Ali Khalfan Al Mansouri, Qatar’s permanent representative to the United Nations Office in Geneva made the remarks during his address at the 36th session of the Human Rights Council being held from Sept. 11 to 29, noting that the council’s failure to take swift and serious action to stop the violations undermines its credibility, objectivity and mechanisms.

The ambassador also said the State of Qatar condemns the continuous Israeli settlement activity in the West Bank and East Jerusalem as well as forced evictions, the continuous killing and detentions, the storming of Al Aqsa Mosque by the Israeli occupation authorities and extremist groups, and the strict measures imposed to prevent Palestinians from entering. Such flagrant violations of international resolutions constitute an obstacle to international efforts towards achieving a fair and comprehensive solution for the Palestinian issue.

Regarding the Syrian cause, Ambassador Al Mansouri expressed the State of Qatar’s condemnation of the Syrian regime’s excessive and serious violations against its people and the recent use of chemicals in Khan Sheikhoun. He stressed the humanitarian and legal responsibility compels the international community to take serious and responsible measures that ensure the cessation of these violations and crimes, and help in holding accountable everyone responsible for them.

Al Mansouri also expressed Qatar’s strong condemnation of the violent attacks against the Rohingya Muslims in Rakhine State in Myanmar, which resulted in the deaths of dozens of civilians and the fleeing of thousands from their homes. He expressed Doha’s deep concern about reports of abuses and violations against the minority, stressing the need for the Myanmar government to abide by international law to protect civilians and achieve reconciliation.

In his closing statement, the ambassador welcomed the remarks made by the high commissioner for human rights regarding the decline in hostilities in Darfur, voicing hope that the Human Rights Council would support the efforts of the Sudanese government and the relevant parties to sustain and consolidate the peace achieved in the region under the Doha Document for Peace in Darfur.