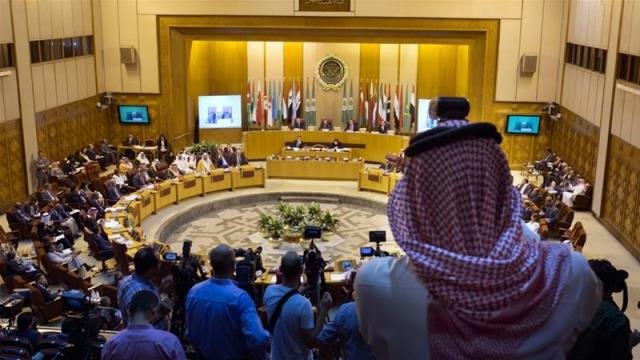 Diplomats from Qatar and the four states blockading the Gulf nation have exchanged heated words at an Arab League meeting in Cairo.

Tuesday’s row, which erupted on live television, is the latest chapter in the three-month-old Gulf crisis in which Saudi Arabia, the United Arab Emirates (UAE), Egypt and Bahrain are blockading Qatar.

The coalition cut diplomatic and trade links with Qatar on June 5, suspending air and shipping routes to their Gulf neighbour.

The four Arab states have accused Doha of financing “terrorism”. Qatar has rejected the allegation as “baseless”.

Kuwait has been trying to mediate the dispute.

During his opening speech, Qatar’s Minister of State for Foreign Affairs Soltan bin Saad al-Muraikhi referred to Iran as an “honourable country” and said ties had warmed with its neighbour since the blockade.

In response, Ahmed al-Kattan, Saudi Arabia’s envoy to the Arab League, said: “Congratulations to Iran and soon, God willing, you will regret it.

“If the brethren in Qatar think they may have a benefit in their rapprochement with Iran, I’d like to say that they have this evaluation wrong in every way. The Qataris will be held responsible for such a decision.”

He added that in “the coming days will prove them wrong because we know that the Qatari people will never accept the Iranians to play a role in Qatar”.

“Their direction needs to change, and we will continue our policies until Qatar changes its policies of aggression against the four boycotting countries, as long as Doha supports and funds terrorism and intervenes in the Middle East countries’ internal affairs,” Gargash said.

Muraikhi responded by saying that the crisis started when Qatar News Agency (QNA) was hacked by UAE-backed perpetrators who attributed false statement to the emir of Qatar.

“Then we saw this vicious media campaign against Qatar, waged by rabid dogs backed by some regimes,” Muraikhi said, adding, “Mr Anwar [Gargash] forgot to mention that the four blockading countries tried a military action against my country in 1996.”

The Qatari diplomat lamented Kattan’s tone in the exchange, saying: “[It] is all threats and I don’t think he has the authority to threaten and speak like this.”

The exchange then descended into a row between Kattan and Muraikhi, with each telling the other to be quiet.

Muraikhi said Saudi Arabia was looking to depose the emir of Qatar and replace him with Sheikh Abdullah bin Ali Al Thani, a little-known Qatari sheikh who has been thrust into the limelight by the Saudi-led bloc.

“This is an improper thing to say because the kingdom of Saudi Arabia will never resort to such cheap methods and we don’t want to change the regime, but you must also know that the kingdom can do anything it wants, God willing,” Kattan said.

“We know very well Qatar’s long history in supporting terrorism and that they have provided weapons and funds in Syria, Libya, Yemen even inside Egypt that killed so many,” Shoukry said.

Qatar backed a democratically-elected Muslim Brotherhood government in Egypt before it was overthrown by the military in 2013.

The Arab states have demanded that Qatar sever any links with the Brotherhood and other groups they deem to be “terrorists”.