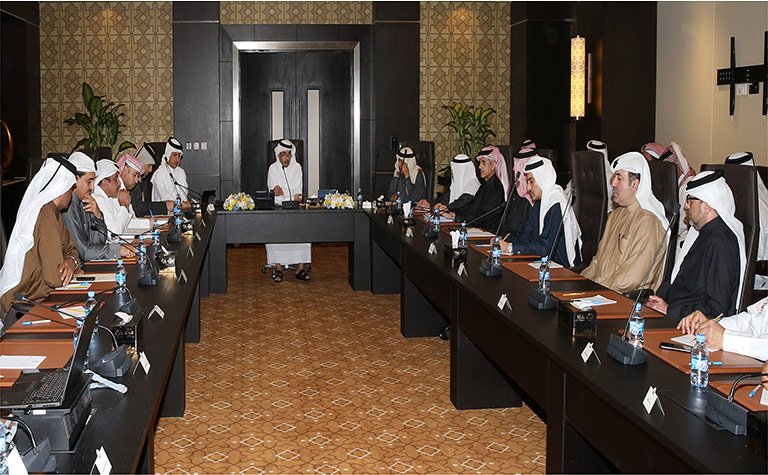 Prime Minister and Interior Minister reviewed the actions taken by the government based on the Committee’s recommendations which aims to overcome obstacles facing investment in the country.

Sheikh Abdullah bin Nasser AlKhalifa underlined the necessity of the government’s implementation of Emir of Qatar Sheikh Tamim bin Hamad Al-Thani’s directives to promote the economic growth in the State by providing a proper environment to diversify the economy and attract local and foreign investments.

Prime Minister refereed to the last October meeting with heads of the listed companies in the presence of some of ministers as representatives of the government, where they reviewed the opinions and perceptions about the development of business and investment environment, and decided to form a joint committee of representatives of the government and the private sector, called the Committee of Promoting Business and Investment Environment.

The committee belongs to the Office of the Prime Minister and is aimed to discuss and overcome the obstacles facing the private sector, in addition to studying the initiatives and proposals of joint ventures between the public and private sectors.

Prime Minister and Interior Minister underlined the government’s attention to the committee’s recommendations to find the necessary solutions to enhance the business and investment environment in order to achieve the public interest of the state and the private sector.

The validity of environmental permits from the Ministry of Municipality and Environment were also extended from one year to three years, and it has been also working to facilitate the renewal of environmental licensing procedures.

HE the Prime Minister said that the Ministry of Economy and Commerce is working on the preparation and publication of a guidebook to clarify the business activities and investment opportunities. The data will be updated continuously, and the Ministry will decide quickly on granting licenses for informal events for the hotels and tourism sectors through a single window.

Qatar Tourism Authority (QTA) has held a meeting with private sector representatives to review the strategy and make recommendations and proposals on the promotion of tourism in the State of Qatar .

The meeting also discussed a draft Regulation for the Law of Tourism with the private sector, taking note of their observations and recommendations in preparation for issuance.

QTA is scheduled to continue meeting with private sector representatives to examine a number of topics for the development of the tourism sector, including proposals on the provision of land for the establishment of tourist resorts, marine resources and theme parks.

Prime Minister and Minister of Interior of State of Qatar agreed to grant the 4 and 5 stars hotels the issuance of tourist visas and directed to respond to hotels’ requests for working visas to cover their needs of staff in the tourism sector.

HE the Prime Minister and Minister of Interior also announced directives setting clear criteria for the classification of hotels in conformity with international standards and giving hotels a sufficient period of time to be re-positioned.

He pointed out that passengers via foreign airlines will be given tourist and transit visas on the basis of the principle of reciprocity with Qatar Airways.

Prime Minister announced that Lusail and the Pearl projects shall be expected from the procedures of issuing licenses while their managements shall be provided with the authority to grant special licensees of construction, completion of construction, electricity and civil defense for real state developers.

In this context, the Ministry of Municipality and Environment in coordination with the Public Authority for Electricity and Water, the Department of Civil Defense and other relevant agencies were directed into achieve the conclusion of an agreement with the management of the two projects by the Ministry of Municipality and environment, Civil Defense and Kahramaa, which requires on the other hand that the management of the two projects shall assume full responsibility before the State in case of a breach by the developer companies of the standards and conditions stipulated by the agreement and the approved urban plan.

HE the Prime Minister and Minister of Interior announced directives to the Ministry of Municipality and Environment to define specific periods of time to decide on building permit’s applications, including preliminary and final licenses or building completion certificates.

HE Sheikh Abdullah bin Nasser bin Khalifa Al-Thani said that the Ministry of Energy and Industry is working on implementing the Single Window project for the issuance of licenses for all private industrial projects and it is also going to announce all the required standards and measures for the issuance of industrial licenses so as to facilitate the procedures within a specified and clear time frame for issuing licenses.

The Prime minister decided to form a committee to develop an appropriate mechanism for pricing lands in the industrial and logistics areas. He also directed the Ministry of Transport and Communications to study a project aimed at establishing free zones according to the latest international standards, which would have a vital role in promoting economic diversification and attracting local and foreign investments.
In this context, HE the Prime Minister and Minister of Interior pointed that there is a number of allocated lands, which are being developed, for the construction projects of schools and hospitals by the private sector.
The lands’ locations and the date of their release will be done later along with the determination of their price as well as the evaluation of projects and their value added for the health and educational process in the State of Qatar.

At the conclusion of the meeting, Sheikh Abdullah bin Nasser bin Khalifa Al-Thani stressed the government’s ongoing efforts to work and coordinate with the private sector to support Qatar’s economic growth. HE the Prime Minister called on the Business and Investment Environment Development Committee to continue its ongoing work in order to study and discuss all the obstacles that may face the private sector and make recommendations to overcome them, stressing that the Committee plays a vital role in achieving communication and providing solutions to several problems.

HE the Prime Minister and Minister of Interior also called on the Committee to work on coordinating between the public and private sectors to study the opportunities for cooperation between the two sides and provide initiatives and proposals for joint projects in order to contribute to enhancing the economic growth in Qatar.