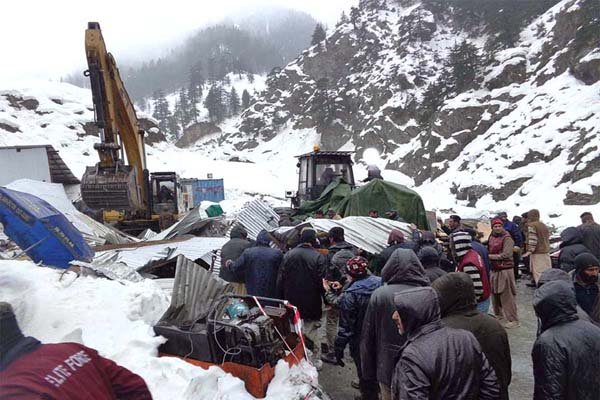 As many as seven died and similar number injured due to land sliding and avalanche in Ziarat near Lawari tunnel in Chitral district.

Workshop was hit by land sliding and avalanche as a result of, 14 people were covered under the debris. Chitral Levies, Chitral Scouts and Chitral Police along with local volunteers took part in rescue operation
and recovered seven dead bodies and seven injured from the debris, who were rushed to Teaching Hospital of Peshawar.

According to DC Chitral those who died in this incidence were identified as Rahmat Zada of Drosh,(Chitral) Jalal Khan resident of Drosh, Rahmat Ghazi of Drosh, Nadeem Khan of Punjab, Haji Iftikhar, Kamran Khan and Muhammad Asif residents of Punjab.

Those who were injured in this mishap were Altaf Hussain of Liya Punjab, Zamarrut Hussain of Gojar Khan, Qaisar Nisar of Sialkot, Shakeel Ahmad of Jinjirat Koh Chitral, Gul Alam of Drosh Chitral Mujeeb of Dhameer Arando Chitral, and Bahadar Wali of Drosh Chitral.

It is worth to mention here that avalanche hit Chitral scouts post a few years back as a result 7 soldiers had died as well as 4 people had died by avalanche in this area in 2014.

While District Police Officer Syed Akbar Ali Shah added that a heavy avalanche hit house and cattle house of Kabeeruddin resident of Ajoo goal Garamchishma area as a result 25 cattle died under the debris of
avalanche but people of the house survived miraculously.

DC Chitral added that roads of Arkari valley, Broghul Kan khoon are still blocked due to heavy snowfall and we are trying of our best to open them very soon.