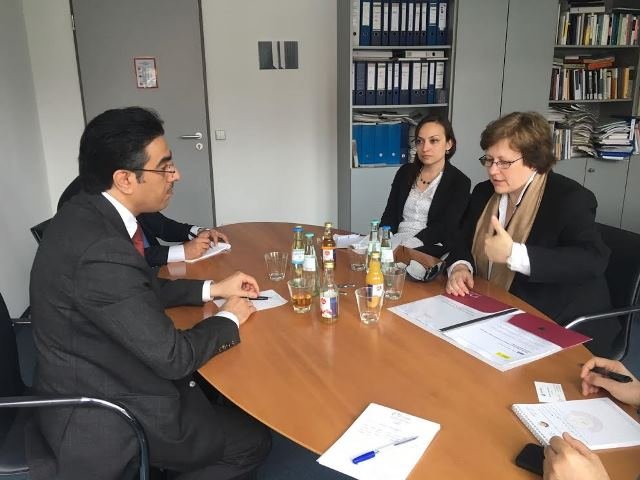 Al-Marri briefed on the repercussions from the siege crisis on the human rights situation in the region.

Dr. Ali bin Samikh al-Marri, also met Dr. Beta Rudolf, President of the Global Alliance of National Human Rights Institutions. NHRC Chairman gave a detailed presentation on humanitarian violations being faced by citizens of Qatar and Gulf Cooperation Council countries along with the residents due to siege imposed on the State of Qatar.

Dr. Al Marri showed his serious concern and fear on the threat for imposing further sanctions on Qatari citizens and on Gulf citizens in general.

He told that number of complaints from various nationalities are increasing day by day as the violations towards right of movement of the nationals and residents in regard to family reunification, property, education, health and migrant labor force. He told that right to practice religious rites were also affected as per the complaints recorded.

He said: These violations affected the citizens of the countries of the blockade before violating the rights of the people of Qatar as well as has threatened rights of 11,387 national of Saudi Arabia, UAE and of Bahrain whose dependents are residing in Qatar.

Regarding the right to freedom of opinion and expression, Al-Marri pointed out that there is a wide understanding among the international organizations at their highest level condemning the demands of the siege countries that violate this right. Al-Marri said that these organizations, headed by the High Commissioner for Human Rights, And that the demand to close them is unacceptable and seriously imposes freedom of opinion and expression.

“In such situations, we need the cooperation of national human rights institutions more than ever,” Dr. Beta Rudolf stressed.