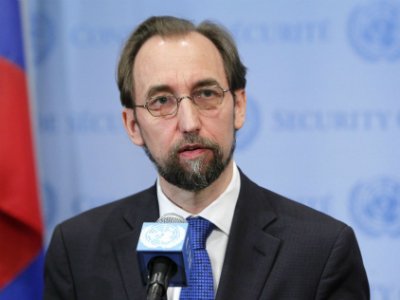 The meeting discussed the flagrant violations of international human rights law and international law committed against the people of Qatar because of the collective punishment and siege imposed by Saudi Arabia, the UAE and Bahrain on the State of Qatar.

The High Commissioner for Human Rights expressed his “concern and condemnation” of the actions and coercive measures taken by Saudi Arabia, the United Arab Emirates and Bahrain against the State of Qatar, which have caused many humanitarian tragedies, pointing out that the directives issued by these countries to deal with a number of humanitarian cases of joint families were insufficient and ineffective.

Prince Zeid bin Ra’ad said that the demands submitted to the State of Qatar cannot be implemented, stressing that he will meet with the UN Secretary-General to address these violations and to end the crisis.

For his part, the Permanent Representative of the State of Qatar expressed appreciation for the statement issued by the High Commissioner on the Gulf crisis and welcomed the statement issued by the UN Special Rapporteur on the promotion and protection of the right to freedom of opinion and expression on demand submitted to Qatar to close Al Jazeera as a “serious blow to media pluralism”.

Ambassador Al Mansouri told the High Commissioner that the countries besieging Qatar have no intention to contain the crisis. On the contrary, they have the intention to escalate and complicate things.

He stressed the importance of following up the violations that accompanied this crisis in a deeper and more determined manner by the High Commissioner for Human Rights, urging the High Commissioner to issue further statements in this regard. The Permanent Representative of the State of Qatar to the UN Office and International Organizations in Geneva invited representatives of the Office of the UN High Commissioner for Human Rights to visit Qatar to examine violations of international human rights law and to meet with individuals who had been subjected to such violations.