Qatar: Minister of Foreign Affairs Participates in Round Table Discussions in Spain 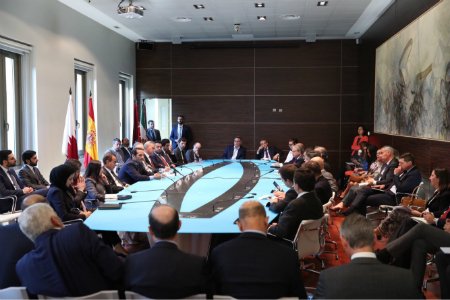 Sheikh Mohammed bin Abdulrahman Al-Thani, Deputy Prime Minister and Minister of Foreign Affairs  of State of Qatar participated Friday in a round table discussions at the Arab House in Spain along with a group of officials, academics and representatives of companies interested in the Middle East, during his current visit to Spain.

He briefed the officials on the efforts of the Arab House in Spain to enhance communication between Spain and the Arab world.

He gave a briefing on his visit to Spain, stressing the importance of strengthening cultural, economic and political relations with the countries of the Arab world.

Sheikh Mohammed bin Abdulrahman Al-Thani underlined the depth of the Qatari-Spanish relations as well as Qatar’s regional and international efforts to establish international peace and security.

He also discussed Qatar’s efforts to protect human rights and preparations for hosting the 2022 World Cup.