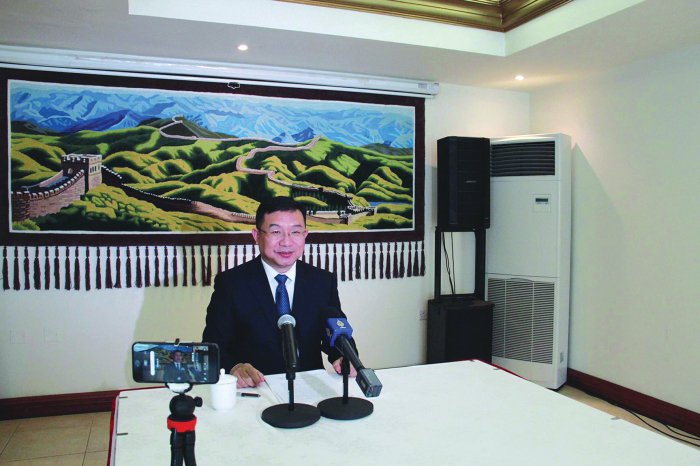 THE recently held 9th Ministerial Meeting of China-Arab Cooperation Forum reiterated the solidarity between the forum members in fighting the coronavirus (COVID-19), the Ambassador of China to Qatar HE Zhou Jian has said.

Deputy Prime Minister and Minister of Foreign Affairs of Qatar HE Mohammed bin Abdulrahman Al Thani, Chinese State Councillor and Foreign Minister Wang Yi and Secretary-General of Arab League HE Ahmed Aboul Gheit, along with 21 ministers from the member countries attended the meeting that was held online.

The Chinese ambassador said the conference aimed to establish a future-oriented strategic partnership between the two sides, adding that China-Arab relations has emerged stronger in the recent past.
Meanwhile, the Arab ministers expressed their willingness to accelerate cooperation in various fields with China, such as trade, investment, energy, science, technology, tourism and culture, to achieve common and sustainable development.

The Chinese envoy said that both sides adopted the forum’s action plan for 2020-2022, which sets a roadmap and timetable for China-Arab cooperation in the next two years.

Talking about China-Qatar cooperation, the Chinese envoy said that Qatar is an active contributor to the development of China-Arab relations, and also “our true partner and reliable friend in the course of building a community of shared future between China and the Arab states.”

He said that China-Arab relations are based on mutual trust, adding: “HH The Amir’s visit to China in 2019 drew a blueprint for the development of China-Qatar relations. In the same year, the two leaders met again during the CICA Summit in Dushanbe, injecting new impetus to the development of our relationship.”

Jian said that over the past four years, Belt and Road Initiative cooperation between China and Qatar has yielded fruitful outcomes. The two sides have formed a cooperation structure with energy at the core, infrastructure as a key, financial investment, and high-tech as new starting points. Bilateral trade between Qatar and China has seen constant growth year by year with bilateral trade volume reaching $11 billion.

He said the two sides have signed multiple contracts on LNG exports, as well as a contract for LNG ship construction worth $3 billion.

He said that Chinese companies’ contribution towards Qatar’s development and economic diversification is significant including for projects such as Hamad Port, Lusail Stadium, first commercial 5G networks in Qatar, etc.

On bilateral cultural relations, he said the 2016 China-Qatar Cultural Year was a great success. The Qatar Pavilion at the 2019 Beijing Horticulture Expo attracted millions of Chinese fans.

In the health sector, facing the unprecedented COVID-19 pandemic, China and Qatar stand with each other and share the weal and woe together, which has become an example of international cooperation in fighting against COVID-19. “We will never forget that when China was facing its biggest crisis, it was Qatar that lent us a hand,” he noted.

“China will strengthen its strategic communication with the Qatari side, continue to provide firm support to each other on issues of core interests and major concerns, and work together to safeguard the common interests of developing countries.”

He affirmed that China supports Qatar in exploring an independent development path that is in line with its national conditions, and its efforts to safeguard national sovereignty and security. “We appreciate Qatar’s rational and wise response to the Gulf crisis, and support resolving differences through dialogue and consultation within the framework of GCC and Arab traditions.”

On the Palestine issue, he said that China firmly supports justice for the Palestinian people and their legitimate rights as a nation to establish an independent and sovereign state.