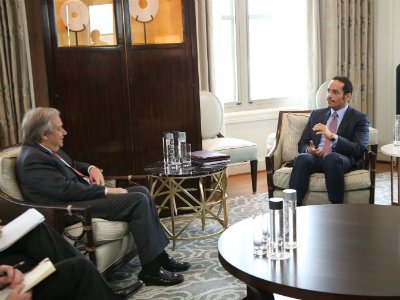 Sheikh Mohammed bin Abdulrahman Al-Thani, Foreign Minister of State of Qatar met with Antonio Guterres, UN Secretary-General at the Embassy of Qatar in Washington today. The meeting took place on the sidelines of the visit being paid by Qatar Foreign Minister to the United States of America.

During the meeting, they discussed aspects of joint cooperation and means of strengthening relations between the State of Qatar and the United Nations in all fields.

The Foreign Minister briefed the UN Secretary-General on the latest developments in the Gulf crisis and the illegal measures taken against the State of Qatar, stressing Qatar’s appreciation for the clear position of the United Nations towards this crisis.

The Gulf people are closely related to each other and the measures taken by Saudi Arabia, the UAE and Bahrain to expel Qataris and separate them from their families have harmed the social fabric and encouraged hostility and hatred, he said.

Sheikh Mohammed bin Abdulrahman Al-Thani said that Qatar rejects being dragged into and accused of supporting terrorism, adding that the State of Qatar is strongly committed to supporting all UN activities in the fight against terrorism and has worked hard over the past years with its international allies to combat all forms of terrorism and violent extremism.

UN Secretary-General stressed the importance of resorting to dialogue, stressing the support of the United Nations to efforts aimed at ending this crisis.