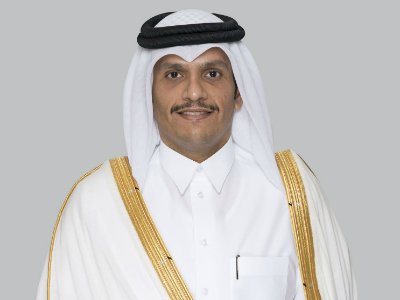 Sheikh Mohammed bin Abdulrahman Al-Thani, Deputy Prime Minister and Foreign Minister of Qatar re-assured on Saturday that the State of Qatar is still committed to resolving the GCC crisis.  In an interview with U.S. TV network MSNBC, Sheikh Mohammed bin Abdulrahman Al-Thani described the propaganda waged against the State of Qatar accusing it of terrorism without any evidence was baseless. He said that Qatar’s  commitment towards resolving GCC crisis is a result of Qatar’s belief that there is a bigger threat in the region, which is terrorism.

He recalled that State of Qatar was a leader in countering terrorism and extremism, the country hosts the Central Command of  global coalition, Qatar is a front runner in combating extremist ideologies, Qatar has established  schools and provides high-quality education to vulnerable societies and poor countries abroad. He said that  Qatar provides education to seven million children in East Asia and Central Asia.

Talking on bilateral ties between the U.S. and the State of Qatar, Qatar Foreign Minister said that the State of Qatar has always been a strong partner and ally to the United States in its fight against terror. This is evident by the fact that Qatar hosts between 11000 and 12000 American troops in Al Udeid Airbase, through which the United States carries out its missions against ISIS. He said that U.S. has always expressed its appreciation on their partnership, and Qatar too highly appreciates the partnership and is working with the U.S. on further developing cooperation.

In regards to US position on siege of Qatar, Qatar Foreign Minister said that Qatar was getting support from the U.S. across the board for putting an end to the siege, whether it was U.S. President Donald Trump or members of his administration such U.S. Secretary of State Rex Tillerson and Secretary of Defense James Mattis among others. On a question of continuing of siege, he said it was a result of the actions of Saudi Arabia and the UAE towards Qatar and the illegal measures they took against the country by shutting borders and separating families, in addition to creating an anti-Qatar propaganda campaign. Sheikh Mohammed bon Abdulrahman AlThani said that , however, State of Qatar was committed to reaching a resolution, because the country realizes that terrorism is a bigger threat facing the region.

On ties between the State of Qatar and Iran, he said that Qatar has a unique relationship with Iran. He said that State of Qatar is located between and shares borders with two big countries – Saudi Arabia and Iran. He noted, however, that there were concerns of Iran’s increasing influence in the region, but stressed that those fears must be addressed peacefully and that is what the State of Qatar is encouraging other Gulf states to do.

He said that during 2016 GCC summit,  decision was taken to engage in dialogue with Iran on the principle that the GCC will be one entity and Iran the other.

On question whether Saudi Crown Prince Mohammed bin Salman was a threat to Qatar’s Future, Sheikh Mohammed bin Abdulrahman Al-Thani said that there was a diversion in the policy of Saudi Arabia and the UAE from the GCC agreement which was the engagement in dialogue. There was also a sense of unpredictability when it comes to the policies of Saudi Arabia and UAE in the region,

He said that there was a lot of chaos and crisis in the region, and  Qatar was part of a bigger strategy now seen in Lebanon too.