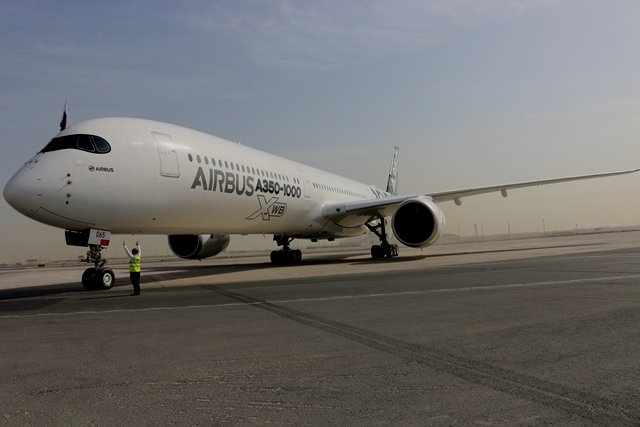 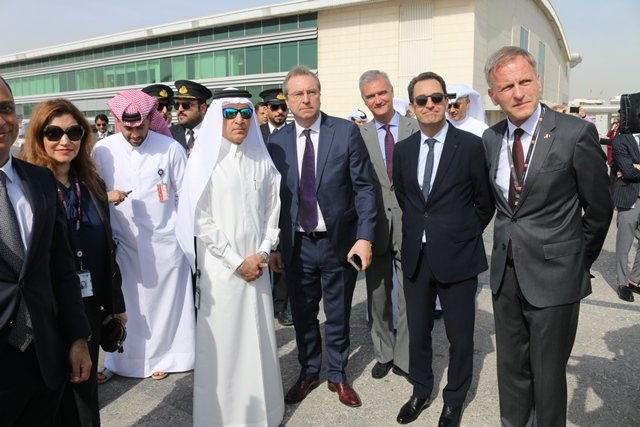 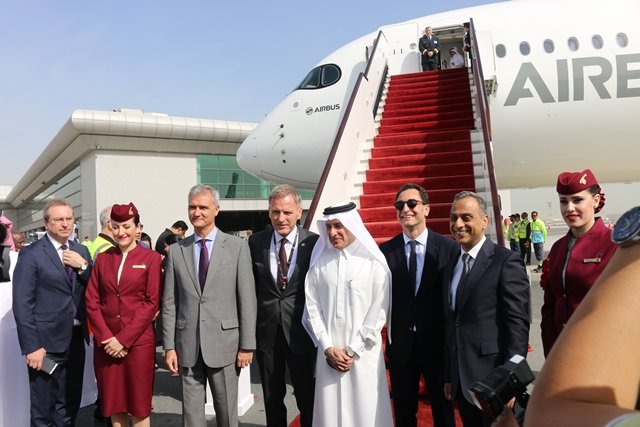 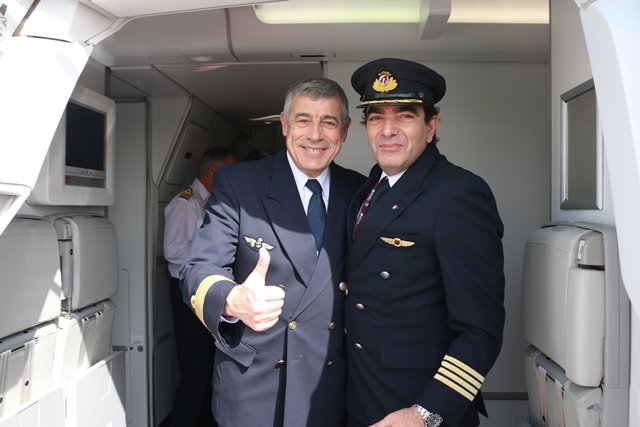 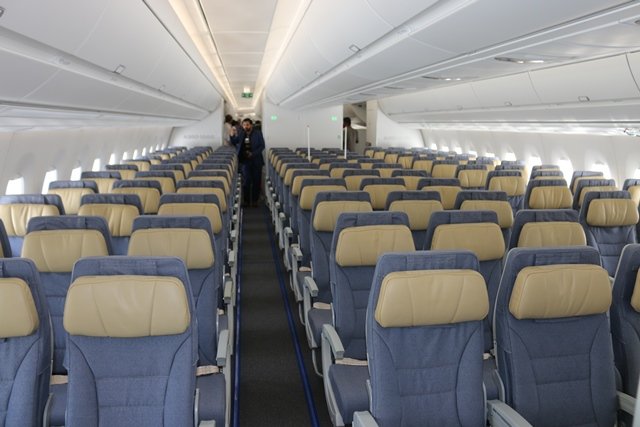 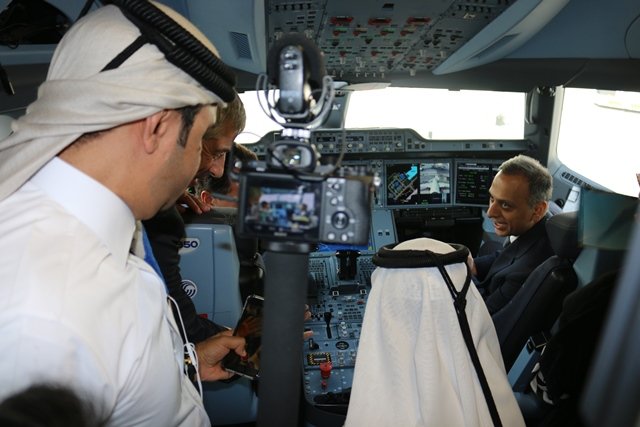 Akbar Al Baker, Qatar Airways Group Chief Executive, welcomed the arrival of the Airbus A350-1000 test aircraft to Qatar, as part of a special Demonstration Tour by Airbus. The visit was the first stop by the advanced aircraft to 12 destinations throughout the Middle East and Asia Pacific, designed to showcase the aircraft’s exclusive features to airlines and passengers. The arrival of the Airbus A350-1000 test aircraft comes just a month before Qatar Airways will become the global launch customer for the world’s very first A350-1000.

The aircraft performed an impressive fly-by over the iconic Doha corniche to commence its international tour. During its stop in Doha, the test aircraft was visited by local dignitaries and VIPs who were given a guided tour of the A350-1000 hosted by Akbar Al Baker. Among the guests included Eric Chevallier, Ambassador of France,  to the State of Qatar, Hans-Udo Muzel, Ambassador of the Federal Republic of Germany,  Ignacio Escobar, Ambassador of Spain, Ajay Sharma, British Ambassador to the State of Qatar, Badr Al Meer, Chief Operating Officer of Hamad International Airport, Senior members of Qatar Airways Flight Operations, Cabin Services, Technical and Corporate Planning departments.

Qatar Airways has ordered 37 of the world’s most advanced passenger aircraft. Next month it will take delivery of the very first aircraft off the Airbus assembly line in Toulouse. The aircraft has been tailor-made with superior-quality cabins to meet Qatar Airway’s exacting specifications for its valued passengers.

Talking to the media on the occasion, Akbar Al Baker said “We are delighted to welcome the Airbus A350-1000 test aircraft to Doha as part of its Demonstration Tour. Its arrival in Doha, as the first stop on this tour, has extra special significance for the people of Qatar, as Qatar Airways is the global launch customer for this incredible technologically-advanced aircraft. With this addition to our existing modern fleet, we will continue to set the standard in air travel for years to come.

“The delivery of the world’s first commercial A350-1000 next month is highly-anticipated by Qatar Airways passengers and employees. Our expert delivery staff have been working in partnership with Airbus to ensure a prompt entry into service so we can deliver outstanding levels of comfort, thanks to the A350-1000’s spacious cabins and advanced technology. We very much look forward to welcoming the A350-1000 into our growing fleet of more than 200 aircraft.”

Fabrice Brégier, Airbus Chief Operating Officer and President Commercial Aircraft,  said “We are delighted that one of our A350-1000 test aircraft visited Doha as the first stop on a global Demonstration Tour to salute Qatar Airways, the global launch customer for the aircraft. At Airbus we look forward to delivering the world’s first A350-1000 to Qatar Airways in the coming weeks.”

The test A350-1000 aircraft undertaking the 30,000 nautical mile tour, is one of three owned by Airbus, and is equipped with fully functional Business Class and Economy Class cabins. The tour follows a highly successful test flight campaign which demonstrated the aircraft’s exceptional design and performance capabilities.  The mid-sized long-haul aircraft is assembled by Airbus at its facility in Toulouse, France. The A350-1000 is 23 feet longer than its sister aircraft, the Airbus A350-900, for which Qatar Airways was also the global launch customer.

He said ‘The A350-1000 offers a substantial increase in capacity with extra seating onboard, a more powerful Rolls-Royce Trent XWB engine, a modified wing trailing edge and a new six-wheel main landing gear. It also provides enhanced levels of passenger comfort, thanks to its advanced light-weight carbon composite design and high-quality interior finish.’

Qatar Airways operates a wide range of Airbus passenger and cargo aircraft in its fleet, which is one of the youngest in the world, with an average age of just five years.

In 2017 Qatar Airways was voted Skytrax ‘World’s Best Airline’ by travellers from around the world, as well as winning a raft of other major awards at last year’s ceremony, including ‘Best Airline in the Middle East,’ World’s Best Business Class’ and ‘World’s Best First Class Airline Lounge.’

Qatar Airways flies to more than 150 key business and leisure destinations across Europe, the Middle East, Africa, Asia Pacific, North America and South America. The airline is launching a host of exciting new destinations in 2018, including Penang, Malaysia; Canberra, Australia; and Cardiff, U.K, to name just a few.

Doha, 25 June 2022 THE Embassy of Nepal and the Non-Resident ...
END_OF_DOCUMENT_TOKEN_TO_BE_REPLACED