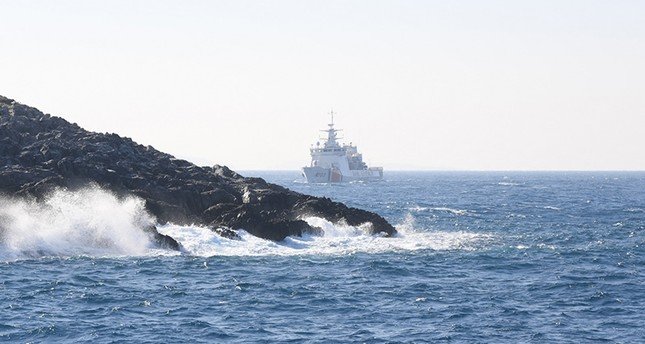 The Turkish Coast Guard on Sunday blocked Greece’s defense minister from approaching a pair of Turkish islets in the Aegean, according to Turkey’s Interior Ministry.

Coast guard officers warned off Panos Kammenos, who was heading to the Kardak islets located 3.5 miles off the coast of Bodrum in Turkish mainland, in an assault boat to lay a wreath there.

In a statement, Turkish Interior Minister Süleyman Soylu said the coast guard units “did what was necessary.”

A statement from the Turkish Armed Forces said that navy and coast guard ships have prevented a Greek navy ship and a coast guard board from entering Turkish territorial waters near Kardak, also known as Imia in Greek.

A decades-long dispute between Turkey and Greece over the uninhabited Aegean islets brought the two countries to the brink of armed conflict in 1996 and led to renewed tensions this year.

The Kardak islets are a pair of two small uninhabited islets, situated between the Greek island chain of the Dodecanese and the southwestern mainland coast of Turkey.

The crisis was triggered when a Turkish vessel shipwrecked on the islets on Dec. 25, 1995. Greece claimed that the accident took place on its territorial waters, which Turkey denied, claiming that the islets belonged to Turkey.

The Greek military sent a soldier to plant the Greek flag on an islet in the east, resulting in the deployment of troops from both countries around the islets.

Turkey’s only female Prime Minister Tansu Çiller said at the time that Turkey was ready for a military operation and sent troops to the western islet to plant the Turkish flag.

Tensions were defused when then-U.S. President Bill Clinton, American delegates and the NATO undersecretary spoke with both sides and the situation was reverted back to normal.

In a similar provocative move last year, Kammenos flew over the islets with a helicopter to throw wreaths to commemorate three Greek soldiers, Christodoulos Karathanasis, Panagiotis Vlahakos, and Ektoras Gialopsos, who were killed during a reconnaissance mission when their helicopter taking off from Greek frigate Navarino crashed on Jan. 31, 1996, at the height of the crisis.

The control of territorial waters in the Aegean Sea remains as a problematic issue between the two countries. Citing bilateral and international treaties, Turkey says both countries have six-nautical-mile-wide territorial waters and airspace around their respective mainland and islands. In contrast Greece, citing international law, wants to increase its territorial waters to 12 nautical miles, which would leave practically the whole Aegean Sea under Greek control. Through a parliamentary motion in 1995, Turkey declared unilateral action by arguing that, if Greece were to extend the boundary to 12 nautical miles it would be considered a casus belli.