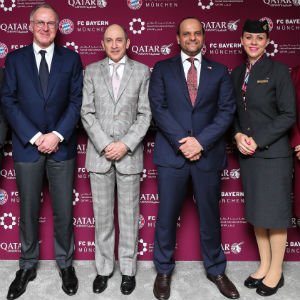 Qatar Airways completed a spectacular showcase at this year’s ITB Berlin, at which the airline revealed a host of 16 exciting new destinations to be launched in 2018-19, as well as announcing a five-year partnership agreement with leading German football team FC Bayern München AG, further strengthening Qatar’s role as a global leader in sports.

At a capacity crowd press conference on the opening day of ITB, Qatar Airways Group Chief Executive, Akbar Al Baker announced a raft of forthcoming global destinations for the airline in line with its expedited expansion plans, including the announcement that Qatar Airways will be the first Gulf carrier to begin direct service to Luxembourg.

Akbar Al Baker, said “We are delighted to have enjoyed such a successful week in Berlin, and are particularly excited to have had this as a venue to announce so many forthcoming additions to our global route network. We will continue to expand, to be able to offer our passengers as much choice as possible. Similarly, we remain committed to continuing to innovate, so that our passengers can enjoy the finest experience available in the skies.”

On the second day of ITB, the airline announced that it has signed a five-year partnership agreement with leading German football team FC Bayern München AG. Under the new agreement, the award-winning airline will become an FC Bayern München platinum partner until 2023. The five-season deal, commencing 1 July 2018, will see the airline’s logo adorning the shirt sleeves of the German league leaders.

Qatar Airways proudly supports a range of exciting international and local initiatives dedicated to enriching the global community that it serves.

Qatar Airways, the Official Airline partner of FIFA, is a leading supporter of major global sporting events, including the 2018 FIFA World Cup Russia™ the 2022 FIFA World Cup Qatar™, and the FIFA Club World Cup™, reflecting the values of sports as a means of bringing people together, something at the core of the airline’s own brand message – Going Places Together.

The airline also unveiled a brand-new exhibition stand at ITB, featuring a full 360 digital screen wrapping around the entire stand showcasing the signature Qatar Airways five-star journey. In-flight entertainment experiences allowed guests to place themselves virtually into one of the airline’s Business Class seats, complemented by a full-size display of the airline’s patented, award-winning “First in Business Class” concept, ‘Qsuite’.

Qatar Airways currently operates a modern fleet of more than 200 aircraft via its hub, Hamad International Airport (HIA). Just last month, the airline welcomed the Airbus A350-1000, for which it is the global launch customer.