Putin To Visit China in June, China-Russia to Boost Ties 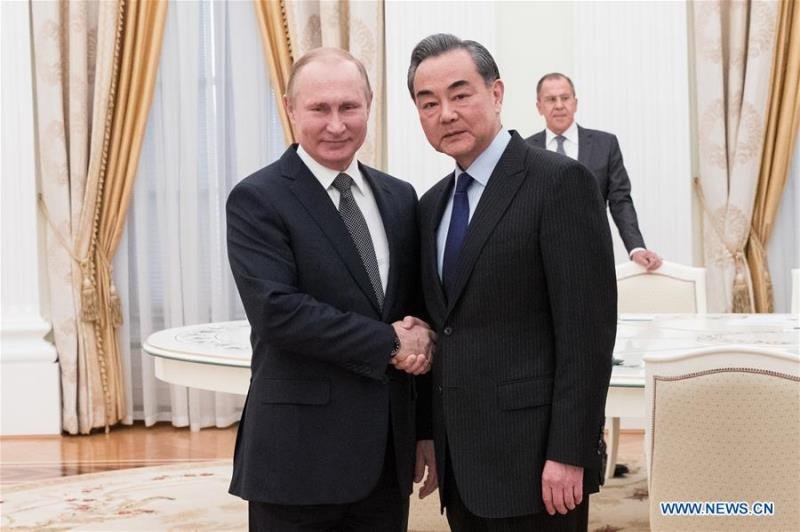 Wang, who is also a special envoy of Chinese President Xi Jinping, conveyed Xi’s congratulations to Putin on his re-election as Russian president.

China and Russia, which enjoy a unique comprehensive strategic partnership of coordination, share mutual political trust of the highest level and have seen their relations continuously develop, Wang said.

This is not only due to the wise political decisions made by the two leaders in view of the general trends in the world, but also based on the long-term internal needs of their national development, Wang said.

With the two countries having successfully concluded their important domestic political agenda, Wang said Xi welcomes Putin to the Shanghai Cooperation Organization Summit in the Chinese coastal city of Qingdao and to pay a state visit in June.

The two sides should step up preparations to ensure that the visit and a series of other important meetings between the two heads of state this year yield fruitful results, as well as open up new prospects for pragmatic cooperation between the two countries and a new era of bilateral relations, he said.

Wang said the two sides should develop a closer and deeper level of communication and coordination to better safeguard their national security and interests as well as maintain regional and world peace and stability.

Putin asked Wang to convey his congratulations to Xi on his election as Chinese president by a unanimous vote and on the success of the annual sessions of China’s top legislative and political advisory bodies.

The results achieved at the two sessions will exert profound influences on China’s future development, ensuring its greater stability and prosperity, he said.

Praising the very good relations between Russia and China, Putin said as neighboring countries and natural partners, the two countries have established their comprehensive strategic partnership of coordination as a result of careful consideration and not expedient measures.

Putin said he looks forward to his visit to China in June and will continue close exchanges with Xi on multilateral and bilateral occasions.

He hoped Russia-China relations would achieve greater progress to benefit both countries and the world at large.

Doha, 25 June 2022 THE Embassy of Nepal and the Non-Resident ...
END_OF_DOCUMENT_TOKEN_TO_BE_REPLACED