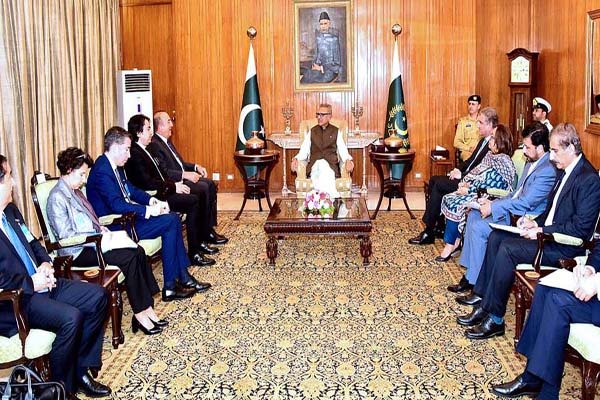 President Dr Arif Alivi on Friday emphasized the importance of further enhancing the close ties between Pakistan and Turkey, especially in the field of trade and commerce for the benefit of the people of the two countries.

Talking to Foreign Minister of Turkey, Mevlut Cavusoglu, who called on him at Aiwan-e-Sadr, the president said that relations between the two countries were unique and based on shared values, history, commonality of interests and shared views on wide range of issues.

The Turkish Foreign Minister is on an official visit to Pakistan to convey the greetings from President Recep Tayyip Erdogan to the new leadership of Pakistan.

The Turkish Foreign Minister congratulated the President on his assumption of office and conveyed the good wishes of the leadership and the people of Turkey for the newly elected Government of Pakistan.

He emphasized the significance of the strategic partnership between the two countries and expressed the hope to further enhance it. He conveyed the desire of his leadership to work closely with the new government in Pakistan and also invited President Dr Arif Alvi to visit Turkey at his earliest convenience.

The President conveyed his congratulations to President Recep Tayyip Erdogan over his victory in recent elections.