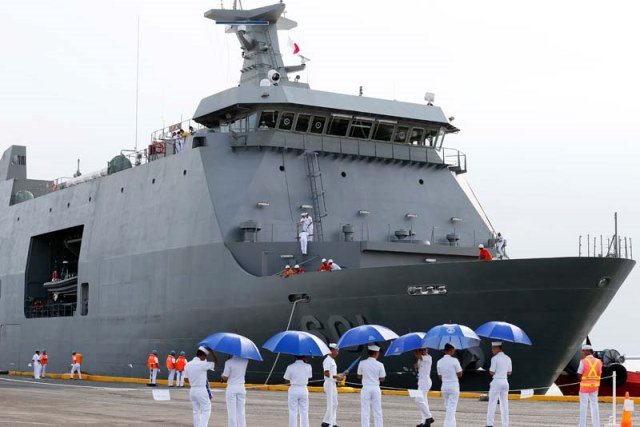 Ranking officials of an Indonesian state shipbuilder were reportedly apprehended before the weekend by anti-corruption authorities over a bribery case involving the sale of two warships to the Philippine Navy worth at least P4 billion.

Arifin and Dwiratmanto were reportedly taken in Thursday by KPK after several personnel of PT. PAL’s finance department were also questioned earlier by KPK.

Arifin and Dwiratmanto were reportedly picked up from the company’s headquarters in Surabaya, East Java, around 11 p.m. local time, according to a Jakarta Post report.

PT. PAL Indonesia had reportedly won a tender for the construction of two strategic sealift vessels (SSV) worth Rp 1.1 trillion ($82.57 million) for the Philippine Navy.

The first warship delivered to the Philippines, named BRP Tarlac, arrived on May 14, 2016 after a five-day journey from the PT PAL shipyard in Surabaya. It was commissioned in short ceremonies at Pier 13, Manila South Harbor on June 1, 2016.

The second vessel, christened BRP Davao del Sur, is scheduled to be delivered this month or by May.

The two-unit SSV procurement project of the Navy reportedly has an approved budget contract of P4 billion sourced from the Armed Forces of the Philippines’ (AFP) Modernization Act Trust Fund.

Sources in Indonesia maintained that the bribery case against PT. PAL officials does not involve any officials of the Philippine Navy or AFP.

“What I understand is that the bribery case was between the Indonesian broker company and the PT. PAL officials, and does not involve anyone from the Philippines,” a source of The STAR said.

As of press time, however, the non-involvement of Philippine officials in the alleged bribery case could not be confirmed.

Likewise, the delivery of BRP Davao del Sur as scheduled amid the issue could not be ascertained.

BRP Davao del Sur was launched and christened in ceremonies also held in Surabaya and attended by Philippine officials in September 2016.

Both BRP Tarlac and BRP Davao del Sur serve as floating command-and-control ships, especially in the conduct of humanitarian assistance and disaster response, and will also serve as a military sealift and transport vessel.

BRP Davao del Sur has an overall length of 120 meters, breadth of 21 meters and draft of five meters. It carries a payload of 2,800 tons.