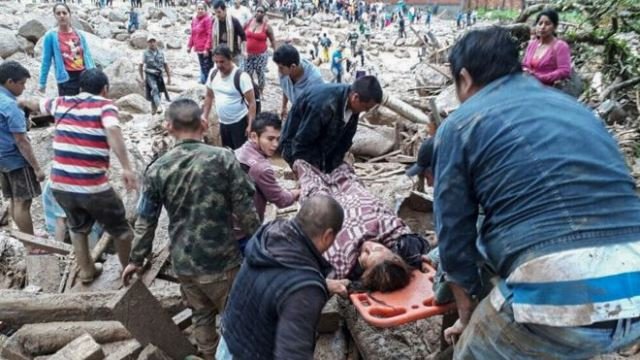 Heavy rains caused several rivers to overflow, pushing sediment and rocks onto buildings and roads in the provincial capital of Mocoa and immobilizing cars in several feet of mud.

“We will do everything possible to help them,” Santos said after confirming the death toll. “It breaks my heart.”

Officials were working to determine the number of missing, Santos said. Nearly 200 people were injured, the defense ministry said, and more than 1,100 soldiers and police officers were called in to dig people out.

“We have sent a team of 150 people to make our response effective and machinery began work immediately,” Carlos Ivan Marquez, head of the national disaster unit, said in a statement.

Even in a country where heavy rains, a mountainous landscape and informal construction of homes combine to make landslides a common occurrence, the scale of the Mocoa disaster was daunting. By comparison, a 2015 landslide killed nearly 80 people in Salgar, Antioquia.

“It’s a big area,” Mocoa Mayor Jose Antonio Castro, who lost his house, told Caracol radio on Saturday. “A big portion of the many houses were just taken by the avalanche.”

He said that people were warned ahead of time and many were able to get out, but several neighborhoods and two bridges had been destroyed.