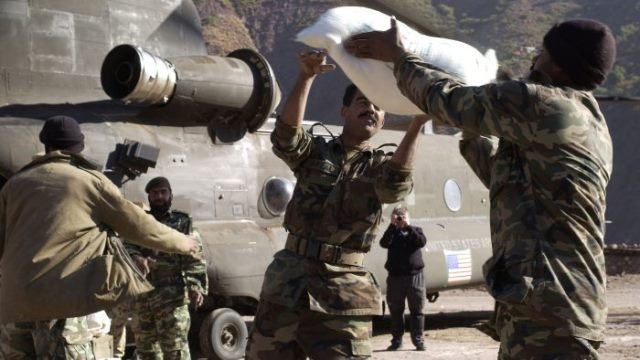 As the dust settles in on President Donald Trump’s Afghanistan speech there has been quite a lot of fuss about Pakistan’s role in providing support to militants in Afghanistan.  That this allegation comes up again is nothing new or earth shattering. It has been a tried and tested formula for the United States (US) to lash out at Pakistan publicly. Yet scratching beneath the surface and behind the headlines, one will notice reliance on the Pakistan military and its intelligence services for American and British security since 9/11.

Further to this, the Pakistani army are the leading trainers of Arab militaries and a key balancing act between the tinder box of tensions between Iran, Saudi Arabia and Qatar. Furthermore, the Pakistani Army has become the first Army  from the Islamic world to train British and international officer cadets at the world’s oldest elite military training school the Royal Military Academy Sandhurst (RMAS). Aside from this, the United Nations’ Centre for excellence for peace keeping training is located in Pakistan where officers from all over the world come to be trained in conflict resolution. This article analyzes the Pakistan Army’s role in securing stability around the world, in the West and Middle East in particular.

Pakistan’s Army has undergone a transition post- the terrorist attacks of 9/11. Prior to the terrorist attacks in the United States, Pakistan’s army had trained for conventional war against its arch enemy India. Indeed, it had fought three major wars against India. Yet as the insurgents fled from Afghanistan into Pakistan, the Pakistanis had to re-train their doctrinal ethos into sub-conventional warfare and counter insurgency.

After initial failures in the tribal areas and Swat Valley, the Army turned a significant corner by routing the insurgency from 2014 onwards. Some of the leading Western sceptics wrote openly how the Pakistan Army had won its war on terror. During this time according to Lt. General Patrick Sanders, Commander Field Army of the British Armed forces said that the Pakistan Army achieved in Waziristan what the British could not achieve in 200 years. The Pakistan Army has one of the highest casualty rates on the Afghan border. This meant they have become extremely battle hardened and sought after as trainers in the Arab world and beyond.

Despite the politics and headlines, senior American officials and leaders have gone quite far to praise the Pakistani military’s fight against terror and the capture of senior al Qaeda leadership. Former Vice President Dick Cheney in particular went into some detail about decisions taken by Pakistani generals despite militant threats against their personal lives and their children. General Tommy Franks talks about the key air and land corridors that were provided by the Pakistan military that led to the first push into Afghanistan to fight Al Qaeda.

So how does this sit with the allegations of Pakistani duplicity in Afghanistan? One cannot argue against those allegations within the parameters of this article but again senior Western generals have come into the defence of the Pakistani military. Former commander of NATO forces in Afghanistan and ex CIA director David Petraeus in a public lecture at the Royal United Services Institution (RUSI) said that in his time he saw no evidence of direct Pakistani involvement in Afghanistan. Britain’s former ambassador to Afghanistan, Sherard Cowper-Coles in his book mentioned that the British Army and its Generals were always concerned about making the Pakistan Army happy much to the disappointment of President Karazai. British former Chief of Defence Staff, General Lord David Richards also worked very closely with the Pakistan Army to ensure the Afghan operations were not compromised.

In the Middle East, the Pakistan Army is no longer taking sides with any one country and instead providing balance to tensions between Saudi Arabia and Iran. Pakistan is also at the moment of writing training 156 Saudi Cadets in its academy in Abbottabad and also dozens of Iraqis and Arab militaries both in country and abroad.

Pakistan was also one of the few countries that Iraq thanked after the liberation of Mosul last month that was not part of the overall international coalition to fight ISIL in Iraq. This was also a result of the extensive training that the Pakistanis have been providing to the Iraqi Air Force. The veteran British Afghan expert and journalist Sandy Gall in his book on the Taliban actually starts out by saying how much the Jordanians respect and like the Pakistan Army for helping them fight the PLO during Black September. One of Pakistan’s leading pilots was given full honours and highest military awards by Jordan as he helped their King train the Jordanian air force during the war against Israel.

The key to the Pakistan Army’s strategic importance lies in what Churchill called importance of having an Army that can help stability in the Middle East and West Asia. As an army that inherited most if not all of its regiments from the British in India, it has strived for excellence in training and performing in multiple arenas around the globe.

Purely as a fighting force and in matters of intelligence sharing, it remains critical to security in the West and the Middle East. Away from the politics it shall continue to dominate the defence diplomacy with the West and evolve with its handling of international relations. Whilst the Islamic State spread rapidly throughout non-Arab Muslim countries it has failed to take root in Pakistan. The Saudis and other Arab states have noticed the army’s success in overturning the insurgency and hence made a Pakistani general in charge of its ‘Islamic NATO’. Ironically whilst the West criticises the Army interfering in politics, prominent US Senator John McCain called for General Raheel Sharif to have his tenure extended in 2016. Similarly a leading editorial in Washington Post argued that the General‘s departure could be bad news. Hence to conclude we can say that, Pakistan Army is leading the fight and is playing a key role in warfare and security provision in an increasingly volatile world.

20 January 2022 By Ashraf Siddiqui More than 7,000 books of different ...
END_OF_DOCUMENT_TOKEN_TO_BE_REPLACED