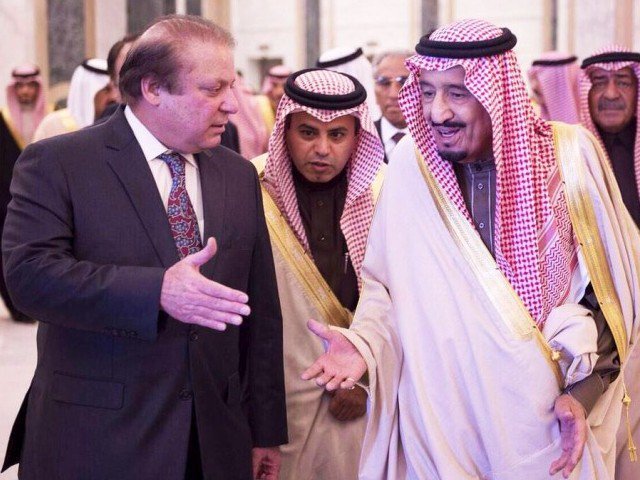 Prime Minister Muhammad Nawaz Sharif has expressed the hope that the current impasse in the Gulf would be resolved soon in the best interest of the Muslim Ummah. This was stated in a press release issued by the Prime Minister House at the end of his day-long visit to Saudi Arabia.

The Prime Minister undertook the visit in view of the “emergent situation” between members of the Gulf Cooperation Council mainly Saudi Arabia and Qatar, the PM House said.

He was accompanied by Finance Minister Ishaq Dar, Chief of Army Staff General Qamar Javed Bajwa and Advisor to the Prime Minister on Foreign Affairs Sartaj Aziz. “While expressing solidarity with the Kingdom and the people of Saudi Arabia, the Prime Minister said the Kingdom had a very special place in the hearts of Pakistanis and that the Muslim world looked up to the King as the custodian of the Two Holy Mosques,” the statement said.

The Prime Minister reaffirmed the strong commitment of the people of Pakistan for the territorial integrity and sovereignty of the Kingdom, and the safety of Harmain al Shareifain.

King Salman thanked the Prime Minister for his visit and recalled the special nature of relationship between the kingdom and Pakistan ever since its independence, the statement said. “King Salman said that the fight against extremism and terrorism is in the interest of all Muslims and the Ummah.”

King Salman appreciated the exceptional success of Pakistan against extremism and terrorism, despite challenging situation and environment, the statement said.

“He also reiterated strong commitment and the support of the Kingdom for all issues of interest for Pakistan, including matters of its national security.”