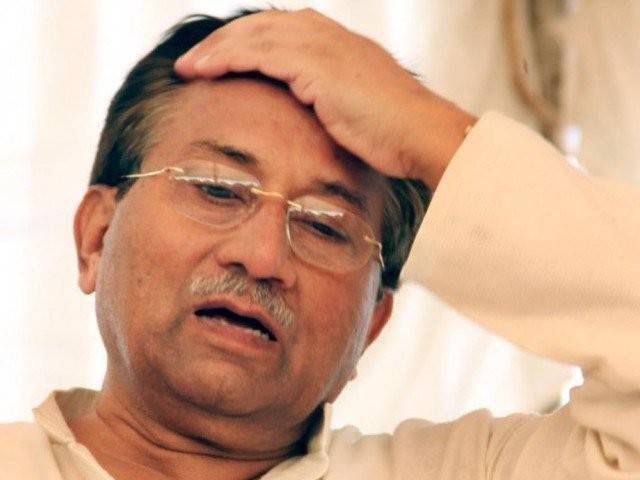 The court also imposed a fine of Rs500,000 each on both convicts.The police arrested the former DIG and the former SP from the premises of the court on the occasion as they were on bail.

The court announced the verdict in the Adiala Jail premises under tight security arrangements.In a landmark decision, the court declared former president Gen (retd) Pervez Musharraf an absconder in the case ordering seizure of all his moveable and immovable property.

Five suspects who had been in jail for nine years, including Rafaqat Hussain, Husnain Gul, Sher Zaman, Aitzaz Shah and Abdul Rashid were acquitted on murder charges. The investigation agencies failed to prove a link of the five accused with Baitullah Mehsood, therefore, the court acquitted them.

The two former policemen have been awarded 10 years in prison under Section of 119 of the Pakistan Penal Code (PPC) and 7 years each under Section of 201 of the PPC. They have also been fined Rs500,000 each; in case they do not pay the fine, they will have to spend another six months in jail.

Saud Aziz, who was the DIG police when the incident happened, had been facing charges of abetting the killing of Benazir Bhutto as he ordered the transfer of then superintendent of police Ashfaq Anwar from Benazir’s rally to Sadiqabad. The prosecution also blamed him for not conducting the autopsy of the deceased as it was essential for investigations.

In November 2008, the ATC indicted Aitzaz Shah, Sher Zaman, Abdul Rasheed, Rafaqat Hussain and Hasnain Gul for killing, hatching criminal conspiracy to kill, abetting the perpetrators, using illegal explosive material and spreading terrorism on Dec 27, 2007 when 22 people, including former prime minister Benazir Bhutto, were killed in a gun-and-bomb attack in Rawalpindi’s Liaquat Bagh, when she was leaving after attending an election rally.

After more than nine years of her assassination and hundreds of hearings, the prosecution failed to link those arrested and the main accused, including former Pakistan Taliban chief Baitullah Mehsud, who was killed in a drone strike several years ago.

The Federal Investigation Agency (FIA) prosecutors during the media talk said that former DIG Saud Aziz was a facilitator of the crime as he did not provide security to Benazir Bhutto on the occasion. Secondly, he did not allow to conduct the postmortem of Benazir Bhutto’s body, which was in police custody. Thirdly, on the directions of Saud Aziz, police had washed out the crime scene immediately, the prosecutors said.

To a question, the FIA prosecutors said that some of the accused recorded confessional statements according to Section 164 before a magistrate in Benazir murder case. But, in the last moments during the trial, the accused changed their statements and told the court that the police had taken their signature on a plain paper.

As the defence and prosecution completed their arguments here on Wednesday, the ATC, Rawalpindi, Judge Muhammad Asghar Khan reserved the verdict, which was announced on Thursday.

During Wednesday’s hearing, accused Aitzaz Shah’s counsel, Naseer Tanoli, gave his arguments and said that investigation by the FIA was full of flaws, adding that the accused in the case were not even asked why they were arrested.

Giving arguments, the counsel said that Aitzaz Shah was declared a suicide attacker while the seminary administration was not interrogated from where he got training. Tanoli also said that Ismail, who was declared an operator in investigation and had taped Baitullah Mahsood’s call, had fled the court.

The FIA Prosecutor, Chaudhry Azhar, in his arguments, said that the attack was carried out from outside of the vehicle and not from inside, so why interrogate those who were in the vehicle. He also said there were flaws in the dates of arrest of the accused on the part of police and not FIA.

An FIR was registered over the incident on the behalf of the state, following which the murder trial of five suspects began in February 2008. But when the PPP won the general elections in 2008, the investigation was handed over to the FIA.

During Wednesday’s hearing, FIA Public Prosecutor Chaudhry Azhar also said that PPP leader Babar Awan was in Bhutto’s back-up vehicle, which was under the control of party leader Farhatullah Babar and added when the investigation was handed over to the FIA, the vehicle was recovered from Zardari House in Islamabad.

He also said that former president Pervez Musharraf had excused himself from appearing before the court citing death threats from al-Qaeda. “Of the 121 witnesses, only statements of 68 were recorded,” he informed the court further.

While suspects Hasnain Gul and Rafaqat’s counsel Jawad Khalid told the court that the statements received from his clients held Musharraf, among others, responsible for the crime. He also claimed that there was no solid proof against his clients and there was a conflict between investigating officers’ statements and the weapons recovered from the crime scene. “This raises suspicion,” he remarked, adding that the court should show mercy towards the innocent and highlighted that “the real culprits are not being punished for the crime.”

FIA Prosecutor Khawaja Asif accepted that there was no record of the suspects in the DNA report. He also claimed that “Bhutto was targeted for deviating from the US policy” and added that there were no explosives on the suicide jacket that the suspects had submitted for DNA testing. Moreover, the suspect’s DNA report had not been submitted to the court, he said.

On the other hand, the counsel for the other two suspects, former Rawalpindi CPO Saud Aziz and former Rawal Town SP Khurram Shahzad, said that nobody could stop a suicide attacker, but it could be investigated who facilitated the attacker.

The counsel pointed out that the statements of those injured in the attack had not yet been recorded, and the post-mortem of the bodies was not done.The court was also informed that out of the three mobile SIMs which were seized, two were not registered in any citizen’s name while the third SIM’s ownership was not investigated.

Pervez Musharraf remained an absconder since the beginning. A separate case was filed against his continuous absence, the trial for which was yet to begin.Meanwhile, after the hearing, talking to media persons FIA Prosecutor Chaudhry Azhar said that the police had submitted four challans while three had been submitted by the FIA in Benazir murder case.

Chaudhry Azhar said according to anti-terrorist clause, it was the responsibility of the investigation officer to cordon off the crime scene. He also said the FIR was registered at 8:20pm while the crime scene had been washed two hours before registering the FIR.

He also said there was sufficient evidence against the accused, adding Saud Aziz was a facilitator of the crime as he did not provide security to Benazir Bhutto at that time.The prosecutor said there were 121 witnesses in the case, while the statements of only 68 people were recorded excluding the statement of driver Abdul Rehman.

The counsel for Saud Aziz talking to media persons said that conducting postmortem of the Benazir was not the responsibility of former CPO, adding Zardari had not allowed him to carry out postmortem. He said that prosecution had not told the court why the crime scene had been washed. Saud said that Benazir did not come out the vehicle.

Concluding arguments before the ATC court of Rawalpindi, counsel for FIA Muhammad Azhar Chaudhry stood his grounds that former president Gen (retd) Pervez Musharaff was behind the murder of Benazir Bhutoo.

He also rejected evidence of a telephonic conversation between former head of TTP and a cleric in which the chief of banned outfit hailed the terrorist for executing the attack successfully.He claimed that Musharraf through his close aide former director general of the National Crisis Management Cell Brigadier (retd) Javed Iqbal Cheema developed the fake evidence to save himself and mislead the investigators.

He also blamed the then DIG Saud Aziz for his involvement in the killing as he ordered transfer of then superintendent of police Ashfaq Anwar from Benazir’s rally to Sadiqabad, adding that Aziz did not conduct autopsy of the deceased essential for investigations. A total of seven judges in different times heard the Benazir murder case in 10 years.

20 January 2022 By Ashraf Siddiqui More than 7,000 books of different ...
END_OF_DOCUMENT_TOKEN_TO_BE_REPLACED