Pakistan to Respond Resolutely Against “Manifest and Future Threats”: NSC 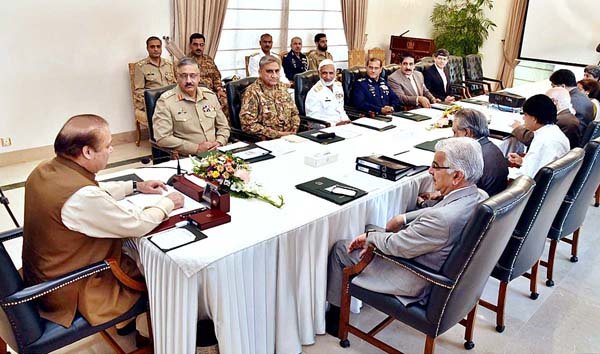 National Security Committee (NSC) said today, Wednesday that it was fully aware of the “institutional collaboration by elements hostile to Pakistan” and vowed to defend itself resolutely against “manifest and future threats.”

The special meeting of the NSC of the Cabinet made it evident following a review of the issues of national and regional security here at the PM Office, a statement released by the PM Office said.

It was the second meeting of the NSC in as many weeks.

Prime Minister Muhammad Nawaz Sharif chaired the meeting which was attended by country’s top civil and military brass. The forum strongly condemned the recent incident of terrorism in Kabul and resolved to remain steadfast and resolute in support of Afghan people.

The participants expressed concern on the deteriorating security situation in Afghanistan and strongly rejected the baseless allegations against Pakistan in that context.

It was highlighted that Pakistan was the only country in the Afghan equation which has achieved clear and measurable success against terrorism despite limited capacity and at a huge human and economic costs.

“Pakistan has not only remained committed to a peaceful and stable Afghanistan but also worked with all regional and global initiatives to that end.”

The forum said at the same time Pakistan has shown exceptional restraint even when Afghan territory was used for terrorist acts in Pakistan which resulted in massive human losses.

“Pakistan was fully cognizant of institutional collaboration by elements hostile to Pakistan and would defend itself resolutely against manifest and future threats.”

“At the same time Pakistan remains committed to continue its ongoing efforts for local, regional and global peace,” the statement said.