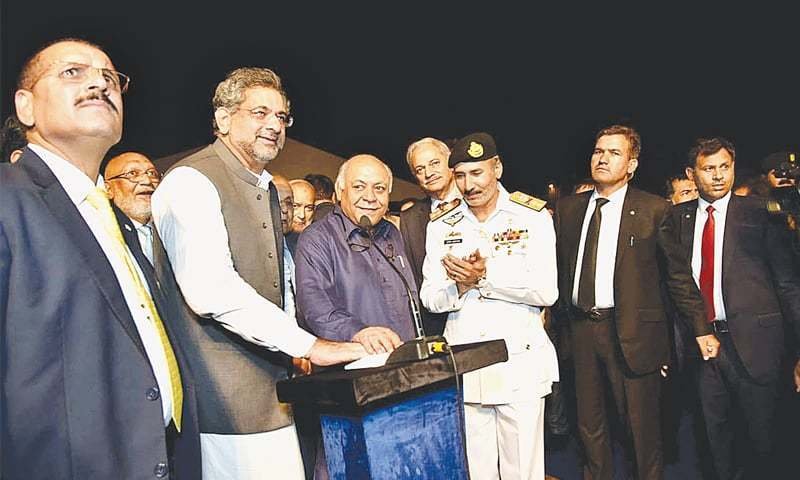 Just a day after the Supreme Court summoned heads of local airlines, including the prime minister, over alleged fake degrees of the airlines staff,  Shahid Khaqan Abbasi on Friday said that “judicial activism” in the country and the National Accountability Bureau (NAB) had “literally” paralysed the government and made it almost impossible for it to do anything.

While emphasising the impor­tance of a democratic system for progress and prosperity, PM Abbasi counted development projects initiated by the Pakistan Muslim League-Nawaz over the past five years.

He showed helplessness over the events in the country during the past few months which had brought the government at odds with national institutions.

“Anybody who works for the government knows that today it is almost impossible for it to do anything,” he said while speaking at the inauguration ceremony of the National Incubation Centre at NED University of Engineering & Technology.

“The rules, the general environment of decision-making, judicial activism, NAB — all [have] contributed to literally paralysing the government today. So it [governance] is very difficult but still we are happy that this government has delivered.”

PM Abbasi arrived in the city in the afternoon to attend a couple of ceremonies. First he drove to NED University where he inaugurated the National Incubation Centre. The centre is a first of its kind technology hub launched under the public-private partnership between the Ministry of Information Technology and Telecommunication, National ICT R&D Fund, Jazz and Teamup.

The PM praised the IT ministry for the initiative which was completed at a cost of Rs2.5 billion. It is aimed at providing an opportunity to young entrepreneurs to launch their start-ups and help them earn more in future. He claimed to have ended up inaugurating projects worth around Rs100 billion.

Unlike traditional claims made by political leaders in the country, PM Abbasi gave the credit of the establishment of peace in Karachi also to Pakistan Peoples Party (PPP) and Muttahida Qaumi Move­ment (MQM) along with his own party’s government in the centre.

“I was born in Karachi and here I attended four different schools. So I always have special feelings for this city,” he said. “We all know that Pakistan is peaceful if Karachi is peaceful and Pakistan will prosper if Karachi will prosper. We have brought the lights back to Karachi. The crime rate here has really gone down and it’s a collaborative effort — whether a provincial government of the PPP or local bodies of the MQM — everybody contributed to this. It was non-partisan approach to solve problems of the city.”

Later in the day the PM inaugurated Deep Water Container Port at Keamari.

Speaking on the occasion, he said the project would play a vital role in providing connectivity to western China, Central Asian states and Afghanistan, adding that it could also be helpful for China-Pakistan Economic Corridor.

APP adds: A spokesperson for the PM House in Islamabad said that PM Abbasi had not yet received any intimation or notice from the Supreme Court of Pakistan for his appearance in the court.

Responding to media reports, the spokesperson said in a statement that the PM fully believed in the supremacy of law and had full respect for the supreme judiciary.

He said the PM would definitely appear before the court on any issue, if summoned. The PM had often reiterated that all institutions needed to work and exercise their powers while remaining within their constitutional limits, he added.