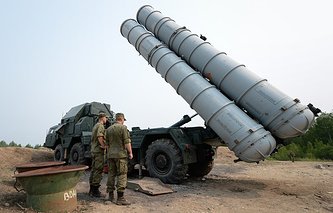 The refusal to supply the S-300 air defense missile systems to Syria is not linked in any way with the recent visit by Israeli Prime Minister Benjamin Netanyahu to Moscow, acting Kremlin Spokesman Dmitry Peskov said on Friday.

Peskov commented on a statement, which acting Russian Presidential Aide for Military and Technical Cooperation Vladimir Kozhin gave in an interview with the newspaper Izvestia.

“Technologically, it is absolutely incorrect to link this [Kozhin’s words] with Netanyahu’s visit because the interview was given before Netanyahu’s visit,” the acting Kremlin spokesman pointed out.

Russia has never announced such deliveries and only specified that it reserves the right in the wake of US-led airstrikes against Syria to do everything possible in this situation.

In an interview published on Friday, Kozhin said that Russia was not delivering the S-300 air defense missile systems to Syria and no talks had been underway on their delivery thus far.

As the acting Kremlin spokesman added, the Syrian army “has everything it needs.”

Russian Foreign Minister Sergey Lavrov stated on April 16 that Russia was ready to consider all necessary steps to reinforce Syria’s defense capabilities, including the delivery of the S-300 systems.

On April 23, Lavrov told journalists that the issue of delivering the S-300s had not yet been decided on but Russian President Vladimir Putin had discussed this subject with the defense chief “in the context of preventing a situation where the Syrian Arab Republic would be left inadequately prepared for aggressive acts similar to the attack on April 14.”.