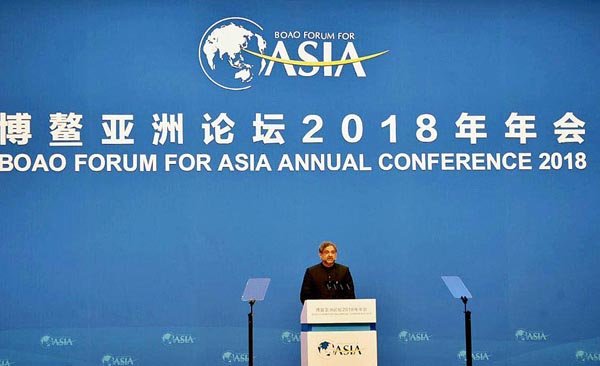 Shahid Khaqan Abbasi, Prime Minister of Pakistan on Tuesday invited Chinese investors and companies to participate in the development of Pakistan’s power Sector with promising returns and incentives.

The prime minister stated this while talking to Administrator of National Energy Administration (NEA) of China, Nuer Baikeli, who called on him on the sidelines of BOAO Forum for Asia, a statement issued by the PM House here said.

The prime minister expressed the hope to further strengthening cooperation with the National Energy Administration of China and the Government of Pakistan.

Appreciating the contribution rendered by CPEC energy projects in alleviating the energy shortage in Pakistan, the prime minister thanked the Chinese Government and NEA for their strong support and collaboration. He said that these projects were providing efficient and affordable electricity into the system and both sides were continuing to work on other projects based on hydropower in North of Pakistan and local coal in Thar district of South.

He also indicated the need of early completion and synchronization of transmission line of South-North with the upcoming generation projects in Karachi and Thar.

The prime minister stated that the Oil and gas sector was a priority area which was featured prominently in the Long Term Plan for CPEC. He emphasized that the Government was committed to supply clean, affordable and sustainable energy to consumers. The prime minister said that focus was on provision of affordable and diversified energy mix as Pakistan holds tremendous potential in the coal, hydro, solar and wind sectors.
The prime minister expressed satisfaction over regular exchange of views between experts on energy from the two sides. He said that private sector was now playing a crucial role in developing Pakistan’s economy by supplementing generation capacities and related infrastructure.

The present Government has introduced robust policy frameworks that carry competitive incentives and simplified procedures for both local and foreign investors, the prime minister said.