Pakistan Disappointed Over US Leadership’s Statements, It remains committed of It’s Role towards Afghan-led Peace Process 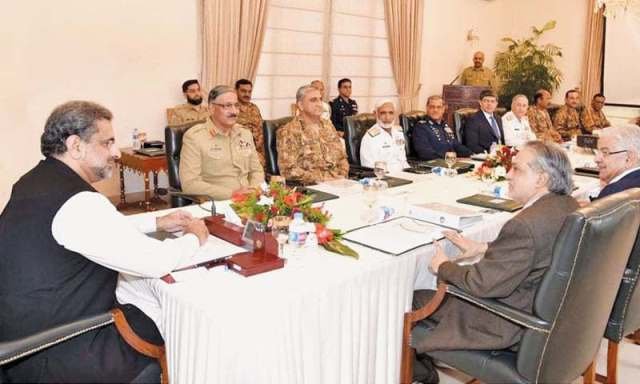 Expressing its deep disappointment over the recent statements by the American leadership, Pakistan on Tuesday reaffirmed that its people held dear their national pride and were capable of defending their country.

This resolve came during the 17th meeting of the National Security Committee chaired by Prime Minister Shahid Khaqan Abbasi here to review the emerging strategic situation in the region and beyond.

According to a press release issued by the PM’s Media Wing after the NSC meeting, the Committee noted its deep disappointment with some of the recent statements articulated by the American leadership.

“The Committee reaffirmed that Pakistanis are a people who hold dear their national pride, who are capable of defending their country, and who have demonstrated exceptional commitment to counter terrorism and to work for regional peace and stability.”

“The Committee reached a consensus that despite all unwarranted allegations Pakistan cannot act in haste and will remain committed to playing a constructive role towards an Afghan-led and Afghan-owned peace process, not just for the sake of its own people, but also for the peace and security of the region and international community.”

The Committee observed that the close interaction with the US leadership following the initial pronouncement of President Trump’s policy on South Asia had been useful in creating a better understanding of each other’s perspectives on the best way forward to achieve durable peace and stability in Afghanistan.

The visits of Secretary Tillerson and Secretary Mattis were also seen by the Committee as robust and forward-looking.

The Committee observed that given this positive direction of progression, recent statements and articulation by the American leadership were completely incomprehensible as they contradicted facts manifestly, struck with great insensitivity at the trust between two nations built over generations, and negated the decades of sacrifices by the Pakistani nation – a nation that has contributed so significantly to regional and global security and peace.

The participants noted that over the past several years, Pakistan’s counter-terrorism campaign had served as a bulwark against possible expansion of scores of terrorist organizations currently present in Afghanistan – a fact acknowledged by the US authorities at the highest levels. Most of these terrorists have repeatedly launched cross border attacks against innocent Pakistanis with impunity by exploiting presence of millions of Afghan refugees in Pakistan, a porous Pak-Afghan border and large tracts of ungoverned spaces inside Afghanistan.

The Committee observed that Pakistan had fought the war against terrorism primarily out of its own resources and at a great cost to its economy, and that even more importantly the huge sacrifices made by Pakistan, including the loss of tens of thousands of lives of Pakistani civilians and security personnel, and the pain of their families, could not be trivialized so heartlessly by pushing all of it behind a monetary value – and that too an imagined one.

It further observed that even today Pakistan was firmly supporting the US-led international effort in Afghanistan; that it was continuously facilitating this through vital lines of communications for smooth counter-terrorism operations in Afghanistan by the international coalition; that as a result of Pakistan’s counter-terrorism cooperation, Al-Qaeda had been decimated from the region; and that it was mostly because of this support that Pakistan was suffering a brutal backlash, including the killing of hundreds of its schoolchildren by terrorists based in Afghanistan.

The Committee was of the firm view that the real challenges in Afghanistan were political infighting, massive corruption, phenomenal growth of drug production and expansion of ungoverned spaces inside Afghanistan full of sanctuaries for multiple international terrorist organizations, posing a serious and direct threat to Afghanistan, its neighbours and the entire region.