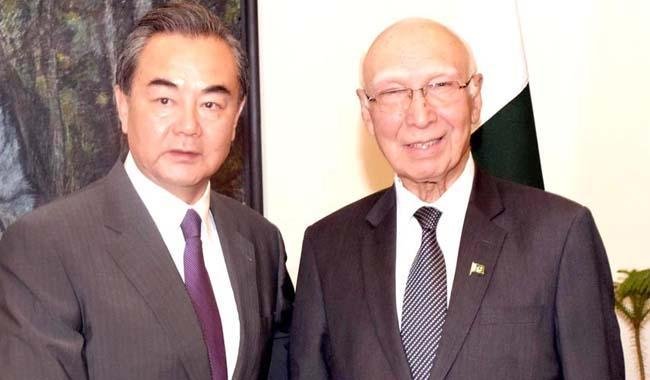 Pakistan, China and Afghanistan on Sunday agreed on seven points for sustainable peace in the region. They were unanimous on the point that a military solution to the Afghan crisis was impossible.

The three countries expressed their willingness to improve relations with each other, strengthen political and mutual trust, enhance cooperation in various fields, including counter-terrorism and jointly meet security challenges.

In a joint press release on Sunday, Pakistan, China and Afghanistan expressed their commitment to maintain regional peace and stability, enhance regional connectivity and economic cooperation and promote shared security and development.

The Chinese side hoped Afghanistan and Pakistan could maintain stable and sound relations, and was willing to provide necessary assistance in this regard based on the needs of both the sides.

According to the press release, Pakistan and Afghanistan agreed to establish a crisis management mechanism, which would include prevention through timely and effective intelligence and information sharing and other mutually-agreed measures.

This would enable the two sides to maintain timely and effective communications in case of any emergencies, including terrorist attacks, with a view to seeking proper solution through dialogue and consultation and preventing deterioration of the situation, which might have negative effect on the bilateral relationship. The Chinese side would support this mechanism.

The three parties agreed to establish the China-Afghanistan-Pakistan foreign ministers’ dialogue mechanism to cooperate on issues of mutual interest, beginning with economic cooperation.

The three parties believed that peace and reconciliation was the fundamental solution to the Afghan issue, which could not be solved by violent means.

The Chinese and the Pakistani sides supported the “Afghan-led and Afghan-owned” reconciliation process and stood ready to continue to play a constructive role in advancing this process.

The three parties called on the Afghan Taliban to join the reconciliation process on an early date.

The three parties believed that the Quadrilateral Coordination Group (QCG) should be revived to create an enabling environment for peace talks and for the Taliban to join the peace process.

They supported the Kabul process and held the view that the Shanghai Cooperation Organisation-Afghanistan Contact Group should be revived as early as possible to play a constructive role in moving forward the Afghan reconciliation process.

The three parties had in-depth exchange of views on the Afghan issue, the relationship between Afghanistan and Pakistan and China-Afghanistan-Pakistan trilateral cooperation.

Meanwhile, Adviser to Prime Minister on Foreign Affairs Sartaj Aziz reiterated that Pakistan wanted peaceful relations with all its neighbours including India.

Addressing a joint press conference with Chinese Foreign Minister Wang Yi, the adviser said that Pakistan had consistently emphasised that peace and stability in Afghanistan was in its interest and a stable Afghanistan would help promote shared agenda of economic development and regional connectivity.

He also informed the Chinese foreign minister about Pakistan’s efforts to strengthen cooperation with the Afghan government in counter-terrorism, border management and voluntary and sustainable return of Afghan refugees.

Sartaj also emphasised the need for the two countries to pursue their abiding commitment not to let their respective soils be used against each other. “We agreed on the need for strategic balance in South Asia,” he told the media about his meeting with Chinese FM.

Sartaj said he also briefed Foreign Minister Wang Yi about the recent developments in bilateral relations with Afghanistan, including meeting between Afghan President Ashraf Ghani and the Pakistan prime minister in Astana.

The adviser said as a result of in-depth discussions with Foreign Minister Wang Yi in Kabul and Islamabad, Pakistan, Afghanistan and China had agreed to establish the following two important mechanisms:

ii. A bilateral crisis management mechanism between Afghanistan and Pakistan that would enable the two sides to maintain timely and effective communications in case of any emergencies, including terrorist attacks, with a view to seeking proper solution through dialogue and consultation.

He said that they had also agreed that the experience of past 15 years had clearly shown that the Afghan conflict could not be resolved only through military means.

In this context, Afghanistan, Pakistan and China agreed on the need for reviving the QCG process in order to create an environment conducive for talks between the Afghan government and the Taliban, he said.

The adviser said Pakistan’s relations with China were the cornerstone of its foreign policy.

About their meeting, Sartaj said they identified areas for further consolidation of the ‘all weather’ relationship between Pakistan and the People’s Republic of China.

Chinese Foreign Minister Wang Yi appreciated the resolute steps taken by Pakistan to counter the menace of terrorism. Both countries agreed that terrorism was a common challenge.

It was also a challenge to global peace and stability.

“We recorded our satisfaction on the implementation of early harvest projects of CPEC which will not only help resolve the energy crisis in Pakistan, but also accelerate economic growth providing wide-ranging benefits to the people of Pakistan,” he added.

He said the next phase of CPEC, as part of the wider One Belt One Road (OBOR) initiative, would not be confined to physical connectivity only but would also promote connectivity of ideas, cultures and people.

In this regard, he said Pakistan was grateful to China for its constructive proposals for promoting peace and harmony in the region.