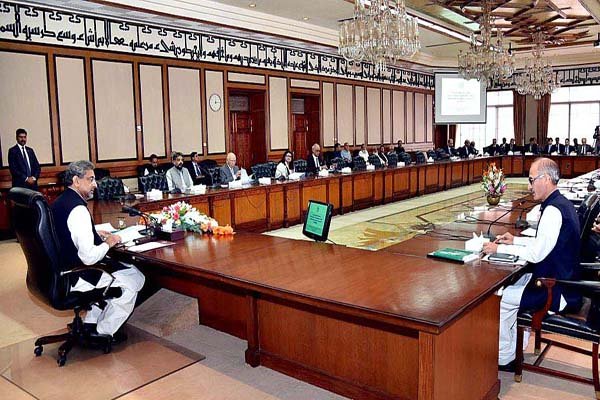 The Federal Cabinet Tuesday approved the placement of draft constitutional amendment before the Parliament for the merger of Federally Administered Tribal Areas (FATA) with Khyber Pakhtunkhwa.

The cabinet was informed that Gilgit-Baltistan Council would be retained as advisory body towards the functions of the Federal Government.

It was also informed that with the devolution of greater administrative and financial powers to the Government of Gilgit-Balitistan, all the rights would be available to the citizens in GB as available to the people in other provinces of Pakistan.

The meeting ratified the decisions of the Economic Coordination Committee (ECC) of the Cabinet taken during its meetings held on May 8 and May 11, 2018.

The decisions of the Cabinet Committee on Energy (CCoE) taken during its meeting on October 12, 2017 were also ratified.

The Federal Cabinet ratified the agreement between Pakistan and Bosnia and Herzegovina on cooperation in the sphere of Defence Industry.

It approved signing of a memorandum of understanding (MoU) between the Board of Investment, Government of Pakistan and Business France.

The cabinet also approved signing of an MoU between Educational Scientific Productive Complex International of Kyrgyzstan and Allama Iqbal Open University of Pakistan in the field of distance education.

The cabinet approved extension in the tenure of Obaid Ahmed Khan, D&SJ as Special Court (Control of Narcotics Substance-II) Karachi for a further period of two years w.e.f. May 7, 2018.

Appointment of Justice (Retd) Ch Shahid Saeed as Chairman of Copyright Board in IPO-Pakistan was approved.

The meeting approved re-constitution of the Board of Directors of Pakistan National Shipping Corporation (PNSC) and also granted ex-post facto approval for the appointment of Chairman, PNSC, Karachi.

Maximum retail prices of drugs were also approved during the meeting.

A proposal for inclusion of various items in the Compulsory Certification Mark Scheme of Pakistan Standards and Quality Control Authority (PSQCA) was also approved.

The cabinet approved signing of an agreement for provision of Grant Facility for USD 14 million to Somalia.

It also approved a proposal for creation of Jinnah Visiting Professorship at London School of Economics.

Reconstitution of Board of Directors, Pakistan Expo Centres (Pvt) Limited was approved.

The cabinet also approved nomination of private sector members for the Board of Directors of Trade Development Authority of Pakistan.