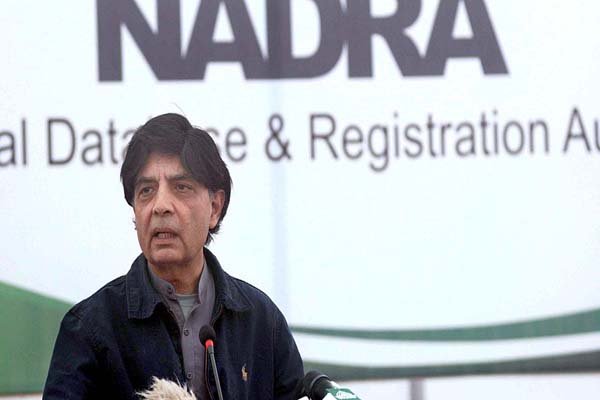 Minister for Interior Pakistan Chaudhry Nisar Ali Khan on Friday said around 450,000 fake Computerized National Identity Cards (CNICs) had been blocked during last three and a half years. Over 32,000 passports were also revoked during the period, he said this while addressing a press conference here at NADRA Headquarters.

Giving comparison of present and previous regimes regarding blocked CNICs, the minister claimed that no action was taken against bogus identity cards before 2011, however, the present government realized the issue and started national re-verification campaign of CNICs.

The verification process of CNICs was branded ‘impossible’ by a section of media, however, the government proved them wrong and successfully completed the task, he said. He admitted that the National Database and Registration Authority (NADRA) had issues, however, the government was bringing reforms and introducing solutions with the passage of time.

He said no concrete steps were taken in the past and during the tenure of last government only 517 CNICs and few passports were blocked. There was no example of verification before 2011.

The national important documents were issued to foreigners and were used in human trafficking, terrorism and other illegal activities which led to defame Pakistan in the world.

He appreciated NADRA officials and media for their effective and praiseworthy role in six month verification process and said any official of NADRA found involved in issuing illegal national documents would be brought to justice.

The minister said mobile phones, SIMs were also verified through bio-metric system and after completion of the process millions of SIMs were blocked.

He said during the campaign, NADRA sent 101 million SMS to family heads asking them to verify their family members. Around 86,380 intruders were found during the six month drive which were identified by the citizens, he added.

Nisar said proactive efforts were being made to restore the CNICs of those who had valid documents. He announced to form an 18 member parliamentary committee to oversee the verification process of CNICs and NADRA would brief the committee every month and decisions would be taken on fast track basis.

Answering a question, he said everyone was equal in eyes of the law and indiscriminate actions were being taken against all the criminal cases.

He said the committee probing the news leak issue had been given a one month extension to submit its report which would be made public.