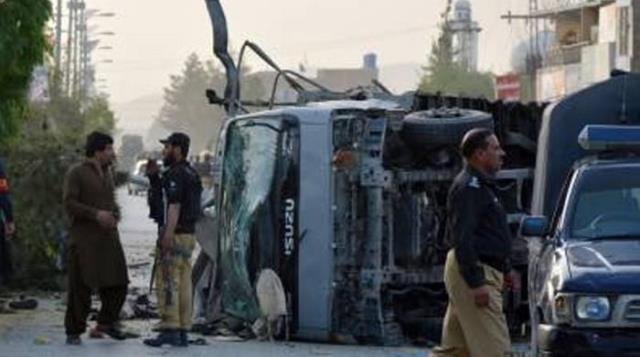 Three suicide bombers attacked the police and other security officials in Quetta, in two different attacks, on Tuesday, resulting in the martyrdom of 10 policemen and injuries to another 15, officials said. The IG Balochistan expressed the likelihood of all the attacks being closely coordinated.

In the first incident, a suicide bomber drove his motorcycle into a police truck, on a road leading to the airport, due to which seven policemen embraced martyrdom, Home Secretary Balochistan, Ghulam Ali Baloch, said. The IG Balochistan, Moazam Jah Ansari, said the bombing was so powerful that the vehicle overturned.

It was not clear whether the third bomber was wearing an explosive vest or if the bike was filled with explosives. According to sources in the law enforcement agencies, an estimated 20 kg of explosives were used in the attack, containing ball bearings and nut bolts. These cops, deployed as the security detail for the visiting president of the Azad Kashmir, were returning from duty when the attack took place.

Half an hour earlier, three security personnel were martyred and six others injured in Mian Gundi area, when two suicide bombers tried to attack a check post but the personnel engaged them, an officer said. He said the personnel fired at the attackers, who detonated their explosives, wounding eight security officials.

The chief ministers of Punjab and Balochistan have strongly condemned the terrorist attack and paid tributes to the martyrs.

20 January 2022 By Ashraf Siddiqui More than 7,000 books of different ...
END_OF_DOCUMENT_TOKEN_TO_BE_REPLACED