Qatar Calls for Ensuring Protection of Civilians in Syria 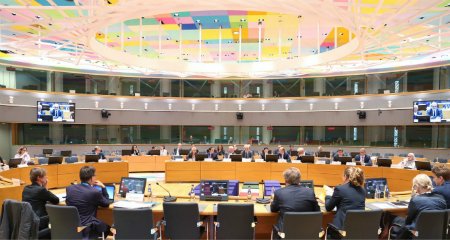 Sheikh Mohammed bin Abdulrahman Al-Thani, Deputy Prime Minister and Foreign Minister of State of Qatar called on the international community to condemn the attempts to manipulate humanitarian aid in Syria and to ensure the protection of civilians and not to use them for political blackmail.

Addressing the third panel discussion on the humanitarian aspect of the second Brussels Conference on Supporting the Future of Syria and the Region, he  said that there are many issues related to this crisis, the most important of which are the protection of civilians and the way this war has been conducted.

He criticized the lack of respect for the rules of war in Syria and the region and the ensuing mass killings, saying: “We believe that our responsibility to protect civilians is far greater than ensuring humanitarian passage where humanitarian aid is delivered, it is how to stop the mass murder in this war”.

Deputy Premier and Foreign Minister of Qatar noted that nearly 3 million Syrians are unable to access humanitarian aid, stressing that it is important to ensure that those people are not used for political blackmail, and to ensure an open safe passage for them.

He urged the international community to condemn any attempt to manipulate humanitarian aid and to protect the civilians, noting that the world has failed to reach a political solution despite the fact that more than seven years have passed since the beginning of the Syrian crisis.

On the other hand, he called on the international community to focus more on the young generation and their future by providing hope and education so as not to be exposed to extremism.