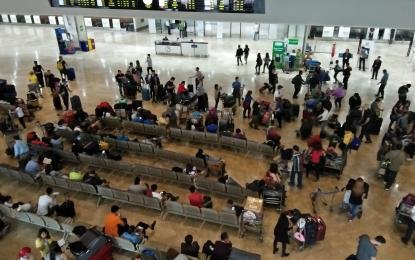 They just have to declare that they are an OFW to be exempted.

This exemption shall be recognized at any point of sale, whether in the Philippines or abroad.

According to Manila International Airport Authority (MIAA) General Manager Ed Monreal, the selling agent may or may not ask for a proof of entitlement during transaction.

“If no proof is shown during transaction, the passenger should be able to present one during check-in at NAIA (Ninoy Aquino International Airport) where same shall be validated,” he noted.

Meanwhile, starting July 31, air carriers will start honoring OFW exemptions at any point of sale for tickets purchased online, and through telephone and mobile applications.

Aside from validation measures that may be adopted by the air carriers, OFWs may also be asked to show his/her proof of entitlement upon check-in at the airport.

MIAA said the proof of entitlement has been expanded under the new memorandum of agreement to include documents such as valid employment contract or recent payslip, among others.

With regard to one year validity of airline tickets, MIAA said it would retain the refund counters at NAIA terminals until April 2018.

Beyond that date, refunds may be done at the MIAA Collection Division in the MIAA administration building along MIA Road.

The refund has no expiration and may be done through a representative, but proper authorization must be provided.

“This exemption also serves as a fulfillment of President Rodrigo Duterte’s promise to look after the needs of our OFWs,” Monreal said.