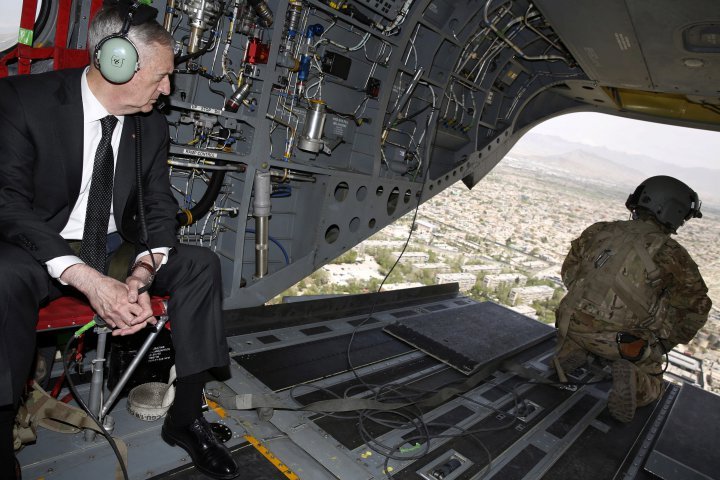 Kabul was the final stop on a six-nation, week-long tour Mattis said was intended to bolster relations with allies and partners and to get an update on the stalemated conflict in Afghanistan.

He is the first member of President Donald Trump’s Cabinet to visit Afghanistan.

Mattis was visiting just days after a bloody Taliban attack that killed more than 100 Afghans on a base in the country’s north. The Taliban also controls key parts of Helmand province in the south. Officials say nearly a dozen of the attackers wore army uniforms and rode in military vehicles, raising concerns of help from inside the compound.

Afghan officials said earlier that the country’s army chief and the defense minister resigned following the weekend Taliban attack. The officials said that President Ashraf Ghani accepted the resignations on Monday. It was not immediately clear who would replace Defense Minister Abdullah Habibi and Army Chief of Staff Qadam Shah Shahim.

Gen. John Nicholson, the top American commander in Kabul, recently told Congress that he needs a few thousand more troops to keep Afghan security forces on track to eventually handling the Taliban insurgency on their own.

McMaster said in a TV interview after returning to Washington that the U.S. in recent years has scaled back its military effort against the Taliban. “Our enemy sensed that and they have redoubled their efforts, and it’s time for us, alongside our Afghan partners, to respond,” he said.

Among the questions facing the administration is how to maintain pressure on a resilient Taliban and keep up counter-terrorism operations in Afghanistan without prolonging a stalemate that is costing U.S. taxpayers billions of dollars a year.

Two officials spoke on condition of anonymity because they were not authorized to talk to the media. The president’s official Twitter account also confirmed the resignations.

In addition to the Taliban insurgency, Afghanistan also is fighting to extinguish a small but troublesome presence in Nangarhar province of militants affiliated with the Islamic State group.

Two weeks ago, Nicholson created a stir by ordering an attack on an IS stronghold in Nangarhar using the military’s most powerful non-nuclear bomb, the so-called “mother of all bombs.

“Mattis has declined to disclose details of damage done by that bombing, which former Afghan President Hamid Karzai has called an “atrocity.”